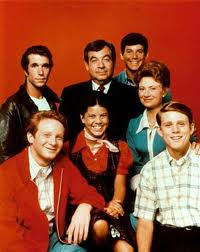 One of the nice things about volunteer ushering at the Globe Theater in San Diego is, of course, seeing some amazing theater; the other thing is occasionally getting to meet some of the actors.

Recently, I noticed Marion Ross of Happy Days fame in the theater as a patron rather than an actress. Marion holds an Associate Artists status at the Globe for her many years of dedicated service to the theater.

Over the years, I've seen her perform in several Globe productions, and I've seen her in Balboa Park, most notably at the Prado restaurant, where many of the Globe actors go to eat between performances.

When I first arrived in San Diego thirty-five years ago, the Old Globe theater had burned to the ground like its more famous predecessor had over four hundred years before.

Our local theater survived the wrecking ball after the Pan American Exposition in the 1930's, when the local community players raised the $200 to save the building. During World War II, the Navy took over the park for the war effort, and many radio stars, Bob Hope among them, broadcast and performed for the troops on the Globe's stage.

In 1978, disaster struck the Globe; a transient trying to warm himself or maybe an arsonist, no one ever found out who, built a fire next to the cheap wooden structure and the worst happened. The building burned to the ground. The community pulled together to raise money for the rebuilding of a far grander theater. 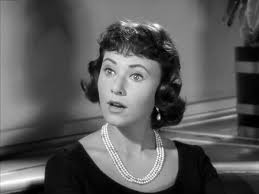 This is when I fell in love with Marion Ross. She was appearing on a local telethon to raise money for the new theater and the phones were barely ringing. She took her position in front of the camera and made her teary appeal.

Marion is a local San Diego State graduate and long time resident, so she started calling people out who she knew in town. She talked about what this theater meant to her and this community, and the phones lit up and the tote board went wild. She stayed with it for the rest of the telethon. I tear up just thinking about it.

Fast forward thirty-five years later. I see Marion Ross sitting with her personal assistant during intermission on a bench in the theater's lobby a couple of weeks ago. I gently walked up to her and said politely, "Miss Ross?" she looked up at me. "You really freaked me out a few weeks ago."

She must have been thinking, "Where's security?"

"I saw you on an episode of Showtime's Nurse Jackie," I told her and rolled my eyeballs in disbelief. She had played a bag lady of shocking decrepitude about to die in the hospital emergency room.

Her defenses immediately went down. She reached out and touched my forearm and her eyes lit up, "I sat in a makeup chair for four hours," she told me, "and when they gave me a mirror to see myself, I was shocked and cried." Marion Ross was barely perceptible under all of that masterful makeup. I went back to work and was thrilled that I finally got to talk to her after all these years. 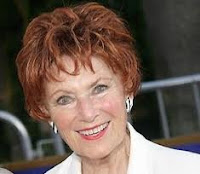 I've been a fan of Marion Ross for a long time, since I saw her in a supporting role in Operation Petticoat with Cary Grant and Tony Curtis. To see Miss Ross in one of her early roles and compare her with her most recent Showtime appearance brings to mind what Macduff says in Shakespeare's Macbeth, "Two extremes - too difficult to comprehend at once."

One of the quirkiest neighborhoods in Detroit's long history was the establishment of an artsy "Hippie" enclave in a depressed neighborhood just south of downtown called Plum Street. In the spring of 1967, young counter culture types, self-described as "freaks," set up head shops, clothing boutiques, alternative bookstores, and several small eateries within a two or three block area.

Among the first supporters of this area, which might be described as Detroit's answer to San Francisco's fabled Haight-Asbury district, was a Wayne State graduate named John Sinclair. John became a local celebrity when he got busted for selling a joint to an undercover agent and was sent to jail.

The group he led, Trans Love Energies, lobbied for his release and held a rally at the University of Michigan's basketball arena, attended by John Lennon and Yoko Ono. By the time the Lennons arrived late that evening, only hard core supporters of Sinclair remained.

Few people were as impressed with John Sinclair as he was with himself. His outspoken manner was one reason he was targeted by the police. He advocated the legalization of marijuana. Today, many people find it difficult to imagine what a huge story this was in the local newspapers. 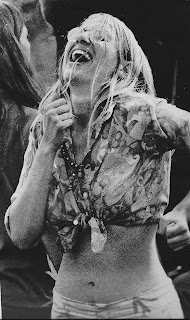 I knew John Sinclair from a distance and saw him in Ann Arbor many times. He was a large man with a huge mane of hair, who stood out in a crowd and attracted a moderate following of young sycophants and musicians. John was a charismatic figure who could be verbally aggressive if challenged or disagreed with - though usually his imperious bearing was enough to keep his followers in line.

Once Plum Street started to became successful, it attracted crowds of  "tourists" from the suburbs which robbed the street of some of its charm. Worse than that, it captured the attention of a local motorcycle gang - The Outlaws. They rolled in and started taking over and roughing people up.

After a stint of bad publicity and little help from law enforcement, the Plum Street "experiment" failed and the area once again became deserted and depressed. 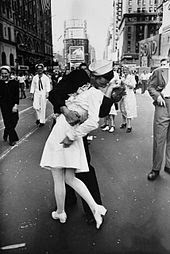 Dubbed "The Kiss" by locals, the statue commemorates the famous Life magazine - Alfred Eisenstaedt - photograph of the spontaneous kiss a young nurse received from an unknown sailor in Times Square, New York, on August 14th, 1945, V-J Day.  World War Two was finally over - the Japanese had surrendered.

The statue is nestled near the shoreline on San Diego Bay between the historic aircraft carrier, the USS Midway, on the north and Seaport Village to the south. 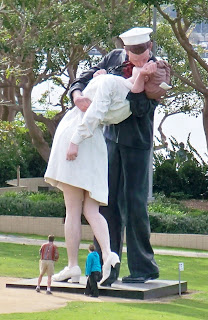 "Unconditional Surrender" has become dear to the hearts of San Diego locals and of Navy personnel everywhere who have shipped out of this Navy port. Now, the statue is in danger of being moved to another city as per the city's lease agreement.

Interested parties are trying to find a way to keep what has become an iconic landmark in San Diego. There is talk that another statue could be cast in bronze, but I personally like the painted statue. It makes a great photo opportunity for tourists and locals alike. I took this shot from the deck of the Midway. 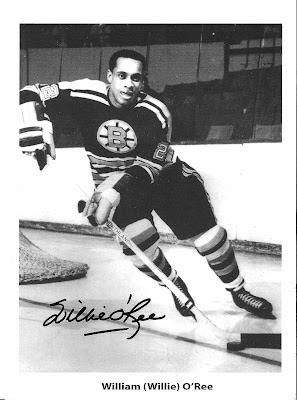 Before I discovered Willie O'Ree was the first black man to play in the National Hockey League, I knew him simply as the husband of my (soon to be) wife's best friend. Now I list him as a great humanitarian and a personal friend of mine. When I married Sue, Willie and his wife "stood up" for us at our wedding ceremony.

Now in his seventies, Willie is still active in professional hockey as the Director of Youth Development for NHL Diversity.

Willie harbored a secret which would have ended his career had it been known. He lost his right eye in a hockey puck mishap; still, he continued to play professionally for many years.

For more information on Willie and his hockey achievements, open the link below. It includes a biography and a video interview produced in Canada.

Posted by Gregory A. Fournier at 6:43 AM 0 comments 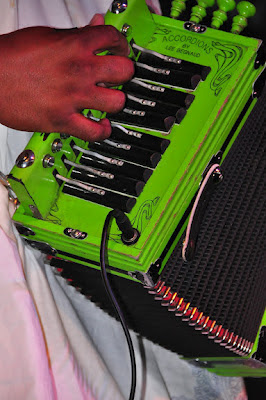 San Diego has a very active zydeco/Cajun community of homegrown dancers and musicians, thanks to The Bon Temps Social Club which holds weekly dances at Tio Leo's Cantina  in San Diego with lessons - most often taught by Greg Benusa.

Greg has taught hundreds of people the basics of zydeco dancing and has a DVD, that makes learning the dance at home a breeze. You can have fun the very first night on the dance floor. His website is www.greg@zydecoach.com.

Club members build a float which more often than not wins the grand prize. A not to be missed aspect of this evening's events is a zydeco mass held before the parade at St. Paul's Episcopal Church, which is well-attended by revelers who are decked out in their colorful costumes. It is a sight to behold. 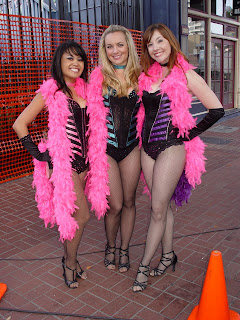 The club's premier event is the Gator by the Bay Festival held each Mothers' Day weekend on Shelter Island at Spanish Landing Park. Many of zydeco's best groups come to San Diego for this event. This year's headliner is Keith Frank.

Of its two main stages, one specializes in zydeco and Cajun music, while the other presents blues and country music. Over this weekend event, tons of crawfish are served, as well as BBQ'ed turkey legs, beignets, and other traditional Louisana and "fair" food.

Gator by the Bay is a splendiferous, family friendly event. Oh, yeah! Don't forget to bring Mom. And Dad probably won't mind tagging along too much either.

Posted by Gregory A. Fournier at 3:45 PM 0 comments

Some Popcorn For the Mind Are you weary of our fast paced world where instant gratification isn't quick enough? Do you long for the "good old days" when America seemed to know how to get things done?

Then this short subject called, "A Day In the Life of Moonbot Studios," is for you. It's a real laugh riot. The studio that produced the "2011" Oscar nominated Animated Short Subject, "The Amazing Flying Books of Mr. Morris Lessmore,"does a great job spoofing itself.

If you are a book lover and haven't seen "The Amazing Books of Mr. Morris Lessmore," my blog post "The Wonder of Books" has a link to it.

Good Advice For This Valentine's Day 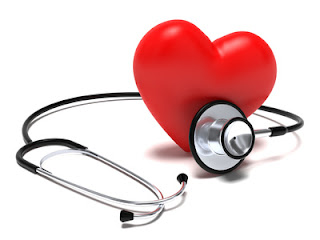 Whether you have a significant other or not, be good to your heart this Valentine's Day.

Can a person stop a heart attack when alone, simply by coughing repeatedly? The experts say no! Don't be fooled!

snopes.com/medical/homecure/coughcpr.asp
Posted by Gregory A. Fournier at 3:18 PM 0 comments

If you or someone you know has been looking for a professional job, the Jooble international "help wanted" website may be able to find you that rewarding career you have been looking for. They are a European employment agency specializing in overseas jobs.

You can access their website from the link below or from the International Flags logo on the right sidebar of my blog - Fornology. If you are in a position to take advantage of this resource and are interested in working and experiencing another culture, this may be your ticket.

jooble-us.com
Posted by Gregory A. Fournier at 5:25 PM 0 comments

Movers and Shakers - People Who Made a Difference

Open the link for a better view of this awesome oil painting. See how many of these famous historical figures from the ages you can identify. Hover the cursor over a face for a name and click on it for information. For starters, that's Dante in the upper right hand corner; everyone else is contemplating eternity with him.

http://cliptank.com/PeopleofInfluencePainting.htm
Posted by Gregory A. Fournier at 12:00 AM 0 comments

The Wonder of Books 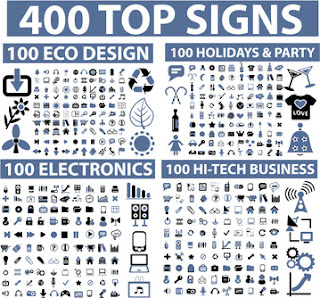 The Fantastic Flying Books of Mr. Morris Lessmore is a sentimental look at reading and literacy. This fourteen minute computer animation is for readers who love the the texture of paper and the magic of turning pages. It is nominated for an academy award.

As society moves further and further into a world of international symbols, logos, icons, and apps, the value and importance of literacy increases.  This video captures the magic of reading and may make you rethink this brave new world of hand held reading tablets.