Blogging on the Cuff - Old School

In an age where cursive writing is a lost art, most people prefer to print - if they are forced to write at all. But people today usually do so with an uneasy mixture of upper and lowercase letters, with little or no regard for the arcane concerns of punctuation or grammar.

These days, public school children get little or no instruction in cursive writing. They are trained to compose directly on the computer and edit as they go. I guess that's progress.

But for me, I find that a fragmented way to write though I suppose it is a more efficient and synergistic way to work. I prefer working my ideas out with pen and paper first. It is more tactile and flowing for me and lends itself to improvisational thinking. Once I get an idea of what I want to write and how I want to present it, the physical act of writing slows me down enough to get my ideas worked out on paper; then, I go to the computer to take advantage of its time saving editing and proofreading features.

I marvel at how the ancients wrote. The Egyptians used papyrus and paint; the Greeks used vellum and scrolls; the Romans used wax tablets and a stylus, while the Medieval monks used paper and ink. Shakespeare did marvelous work with ink and a sharpened goose quill. Even the mechanical striking of the old fashioned typewriter keys seems antiquated compared to the muted tapping of a modern keyboard. The immutable law of nature is that everything changes and for everything gained, something is lost.

That brings me to the M.C. Escher engraving, Drawing Hands, sketched in 1948. It has always fascinated me, but now, in this brave new world of electronic publishing and computer animation, it has gained new meaning for me. This lithograph typifies the artist's mad dash at creation and shows what can be accomplished with paper and ink when talent and imagination is applied.

Posted by Gregory A. Fournier at 9:06 PM 0 comments 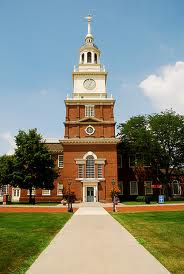 When my brother Rick and I were kids in the early Sixties, we used to sneak into the Henry Ford Museum located in Dearborn, Michigan. These stolen moments in this world-famous museum were the most formative of my childhood. The outside of the old museum entrance was a replica of Independence Hall in Philadelphia.

Inside the foyer, there was a wide staircase leading to what amounted to a shrine to Henry Ford that was free. Rick and I would lurk and wait for our chance to slip unnoticed past the often preoccupied ticket takers. Not so easy these days.

Today, the renovated museum has a new entrance with a bookstore and an incredible Imax theater added to the museum complex. Adjacent to the museum is Greenfield Village, an attraction in its own right. It replicates a nineteenth century village with many famous buildings of that era like the Wright Brothers Bicycle Shop and Thomas Edison's workshop, where the electric light bulb was invented. 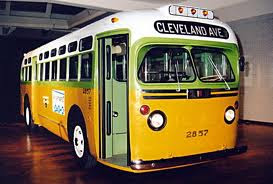 The indoor museum boasts having the restored bus made famous by Rosa Parks in Montgomery, Alabama. The Henry Ford Museum also has the chair President Lincoln was assassinated in at the Ford Theater in Washington DC. A grim irony is that the armchair is protected behind Plexiglas, and brown drops of the dying president's blood still stain the chair's red upholstered fabric.

Collectively, both museums are known as the Henry Ford.

In memory of the 100th Anniversary of the Titanic's tragic maiden cruise, the Henry Ford Museum has assembled an exhibit that does honor to the memory of those who died so many years ago. If you are in the Detroit area, don't miss this special exhibit.

http://blog.visitdetroit.com/entry/walk-through-titanic-henry-ford-museum.html
Posted by Gregory A. Fournier at 12:00 AM 1 comments

Dutchman Peter Hurkos billed himself as the first police psychic and parlayed that into a career in the 1950s and 1960s. After making many claims about his extrasensory abilities in Europe, he came to wider attention after he volunteered to look into the Stone of Scone theft from Westminster Abbey in 1951. He did so at his own expense without official sanction. Hurkos was among several others who were allowed to examine the throne where the stone should have been lodged.

Hurkos made a great show of it by doing a "cold" reading of the area in front of some French reporters, who wrote articles which described his examination of the area in great detail. Thanks to the French press and his adroit self-promotion, Peter Hurkos became a European sensation despite British Home Secretary, Chuter Ede's official statement made on behalf of the British government, "The gentleman in question... did not obtain any results whatsoever."

Peter Hurkos called his gift "psychometry" - the ability to see past-present-future associations by touching objects. He claims he discovered this ability after a serious accident. He was painting a building several stories up in Hague when he fell off a ladder and lapsed into a coma for several days. When he awoke in the hospital, he had the gift.

Hurkos was invited to The United States in 1956 by Andrija Puharich, a parapsychologist and researcher into ESP. After getting Puharich's public approval and a wealth of free publicity, he became a popular nightclub entertainer.

From time to time, Hurkos would involve himself in high-profile police cases such as The Boston Strangler, the Michigan Murders, and The Sharon Tate Murders. The Boston Police found Hurkos a nuisance. He was arrested and convicted of impersonating a police office trying to gather information he could later claim were psychic revelations. With the Manson case, he claimed to identify Charles Manson when it was Susan Atkins, Manson's supporter, who dropped his name in jail.

In the case of John Collins, he proclaimed that the murderer had blond hair and at other times said it was brown. He described the murderer as five foot five or six inches tall and weighing 140 pounds; Collins was over six feet tall and 180 pounds. All of Hurkos' other "revelations" regarding this case could have been easily derived from newspaper articles on the murders, which he insisted he never read. After an unsuccessful week in Ann Arbor, the psychic left for home discouraged, blaming his failure on lack of police cooperation. 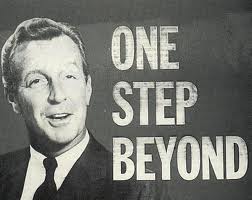 Peter Hurkos had an uncanny ability to promote himself on talk shows like The Tonight Show and The Merv Griffin Show. He appeared in several documentaries about himself, and he was portrayed in the movie version of The Boston Strangler by veteran actor, George Voskovec. Peter Hurkos played himself in the never-to-be released movie about John Collins and the coed killings called Now I Lay Me Down to Sleep.

In 1960, the futuristic show One Step Beyond, brought to you by Alcoa Aluminum and hosted by John Newland, produced a two part show on Peter Hurkos' life story. I've attached the YouTube link below which includes the show's vintage opening. If you are sufficiently interested, the rest of the episode's segments can be found on that page's right sidebar.

Posted by Gregory A. Fournier at 9:25 AM 0 comments

When I found out I had won a Finalist Award in the USA Book News 2011 competition, I felt an immediate sense of accomplishment and validation. What for me was a quirky blue collar coming of age story about race relations in the Detroit suburbs was meaningful to others. 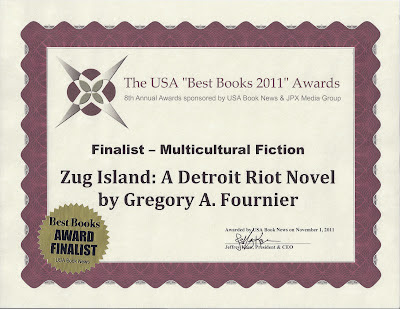 Since publication of Zug Island: A Detroit Riot Novel, one year ago this May, I have received many emails testifying to the unflinching honesty of my portrayal of a time in American history many people would prefer be left unwritten.

In February, I was surprised to discover that I had received another award for Zug Island, an Honorable Mention from the 2012 Los Angeles Book Festival competition. These awards have motivated me to forge ahead with my next writing project, The Water Tower, about the John Norman Collins murders in Michigan of the late Sixties. 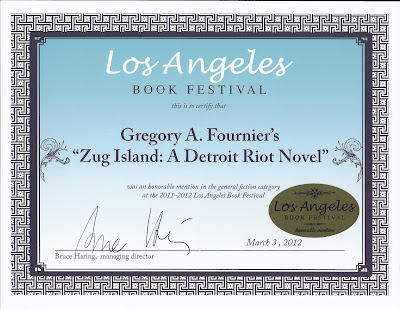 If you are looking for an entertaining and meaningful summer read, click on the Zug Island book cover in the right sidebar for more information. Available from Amazon in a quality paperback edition and Kindle format.
Posted by Gregory A. Fournier at 6:34 PM 1 comments

Fifteen Things You Should Give Up To Be Happy 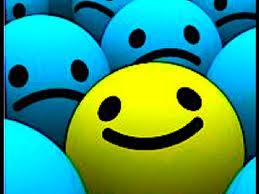 Our Declaration of Independence has a radical statement which had never appeared in any political document before July 4th, 1776 - the idea that individuals have a right to the "pursuit of happiness." This may be the wellspring where Americans derive our characteristic optimism.

In my travels to Europe, I am always struck by how serious people seem to be. Where Americans tend to smile and enjoy a hearty laugh out in public, Europeans tend to be stoic and reserved.  Americans feel that happiness is a birthright, and when we don't feel happy, we feel like something is wrong or missing from our lives.

The expectation to be happy all of the time is unrealistic. Life is not a continuous laughfest - it has its ups and downs which most of us realize. But then there are those people who are devoid of happiness - which leads to depression and other mental health disorders.

There are doctors you can consult, pills you can take, liquor you can drink, and groups you can join, but the potential for greater happiness lies within you if you can be honest with yourself. Ultimately, happiness is a self-improvement project. Get started by opening the link below.

Five Regrets of the Elderly 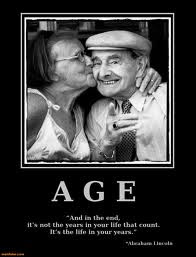 Life is a gift and it amazes me how many people don't bother to unwrap the present. Too many people live deferred lives for all sorts of reasons
only to discover in their later years that life has passed them by. These people often become bitter in old age. Some people are lucky enough to get a wake up call and have a second chance at improving the quality of their lives.

Most of us are familiar with the "If I knew then what I know now" cliche. The link below explains the "Five Regrets" most often expressed by the elderly in their final days. Maybe some of us will benefit from the wisdom of the aged and teach these lessons to our children and our grandchildren.
https://apps.facebook.com/theguardian/lifeandstyle/2012/feb/01/top-five-regrets-of-the-dying?fb_source=other_multiline&fb_action_types=news.reads
Posted by Gregory A. Fournier at 7:37 AM 0 comments 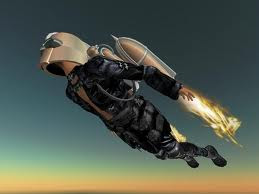 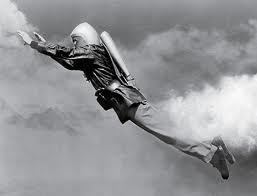 As beautiful as the Grand Canyon is, this primeval place has an unforgiving and deadly landscape. One mental lapse, one operator error, one equipment malfunction, and this test pilot would not walk away alive. This extraordinary individual has the ride of his life, and he takes us with him.

http://www.wimp.com/jetmanflight/
Posted by Gregory A. Fournier at 1:38 PM 0 comments

Imagine the incredible effort that went into attaching each of these hand decorated Easter eggs to this tree. I don't know the story behind the Easter tree, but I'm tempted to write one. 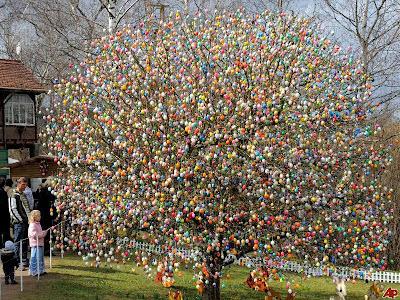 Happy Easter, Everyone!
Posted by Gregory A. Fournier at 6:51 PM 0 comments