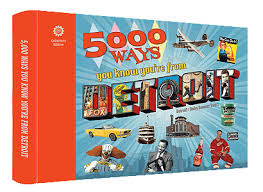 5,000 Ways You Know You're From Detroit (2017) is a treasure trove of memories and images which will resonate with Detroit and Windsor, Ontario area Baby Boomers (1946-1964). But it would be a mistake to think 5,000 Ways is only of interest to the Baby Boomer generation. Anyone with an interest in Detroit's storied past or who wants to learn more about the world their parents and grandparents lived in will find this coffee table book fascinating and informative.


Chris Edwards and Elaine Weeks say that "5,000 Ways is not meant to be an encyclopedia or an almanac. Our book is more of a personal exploration of life in Detroit primarily after World War II based on an eclectic collection of Detroit stories and photos." Each chapter has a narrative that provides relevant historical context with photographs and lists to enhance the reader's experience.

5,000 Ways is not chronological but thematic in its organization. The book can be read cover-to-cover, but it makes a great "jump around" book too. The scope is so broad that no matter how you experience it, you're certain to learn things about the Motor City that will delight and educate you. Of course, the automobile business is well-represented, but chapters on Detroit's music scene, pop culture, fads, shopping centers, and local television personalities will delight young and old alike. But this book doesn't shy away from the city's tragic history and strives to give a balanced account of race relations in the city.

When people discover I'm from Detroit, I often get a condescending response. Too many Americans know Detroit only through photographs of the city's urban ruins at the end of the last century, but they fail to acknowledge the great strides Detroit has made in the twenty-first century. The City of Detroit has a legacy and cache that younger generations of Detroiters and Europeans recognize and are excited about. 5,000 Ways goes a long way to rekindle an appreciation for a wounded city too tough to die.

5,000 Ways is available at select bookstores in the Detroit or Windsor area.
Posted by Gregory A. Fournier at 9:48 AM 0 comments

The era of the Public Enemy in America was from 1931 through 1935 during the depths of the Great Depression. Names like John Dillinger, Pretty Boy Floyd, Machine Gun Kelly, and Baby Face Nelson blazed across the headlines, but none of these criminals captured the imagination of the American public more than Bonnie Parker and Clyde Barrow, whose daring exploits were romanticized by Midwesterners down on their luck. The press glamorized them in newspapers, news reels, and pulp mystery magazines. Their hardscrabble life on the road was anything but glamorous.

When Clyde teamed up with his brother Buck and various other gang members, the press referred to them as the Barrow Gang. Originally, they were cast as underdogs fighting a corrupt banking system and developed the urban myth of robbing the rich and giving to the poor.

On March 22, 1933, the gang narrowly escaped capture and left a cache of stolen weapons, a handwritten poem by Bonnie entitled the "Story of Suicide Sal", and a camera with three rolls of undeveloped film. The staged photos led to Bonnie's glamorization. Some showed Bonnie pointing guns at Clyde and one had her smoking a cigar. W.D. Jones, surviving gang member, testified that Bonnie never smoked cigars or shot at any policeman. She did chain smoke Camel cigarettes.

Clyde's favorite weapon was the .30 caliber Browning Automatic Rifle (BAR) stolen from an armory. The gang also favored "whippet" guns (sawed-off shotguns) they could conceal under overcoats, and a variety of hand guns. The gang is credited with twelve bank robberies, but they preferred to rob small stores and rural gas stations. They killed nine police officers and a number of civilians who were unfortunate enough to get in their way. Their cold-bloodedness eventually soured the public's perception of the outlaws.

The Texas Department of Corrections contacted retired legendary Texas Ranger Frank A. Hamer. It could be argued that Hamer was more lethal than his quarry Clyde Barrow. Hamer was credited with fifty-three kills and surviving seventeen gunshot wounds. Law enforcement investigators studied the gang's movements and determined to set an ambush for them. The gang swung in a circle of five Midwestern states exploiting the "state line" law that prevented police from pursuing fugitives from one jurisdiction into another. 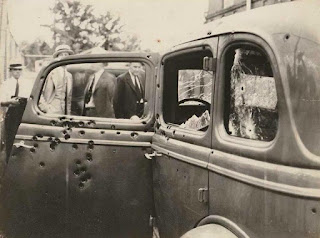 On March 23, 1934 at 9:15 am, a posse of four Texas Rangers and two Louisiana officers hid behind roadside bushes waiting for Bonnie and Clyde to drive by. The posse heard Barrow's stolen Ford V8 speeding down the country road. The car slowed down when Clyde recognized a truck broken down on the side of the dirt road as belonging to a gang member's father whose farm they were hiding out at. When Clyde stopped the car offering to help, the posse opened up on the couple. First they emptied their BARs into the Ford, then they let go with a shotgun barrage, and finally they emptied their handguns. Though legend holds that each body was riddled with as many as fifty rounds apiece, coroner Dr. J.L. Wade's autopsy report documents seventeen bullet wounds on Clyde's body and twenty-six on Bonnie's body. Their remains were buried separately in Texas cemeteries.

A mere month before their deaths, automobile magnate Henry Ford received a letter proported to be from Clyde himself praising Mr. Ford's new V8 models. This letter is on display at the (Henry) Ford Museum in Dearborn, Michigan. 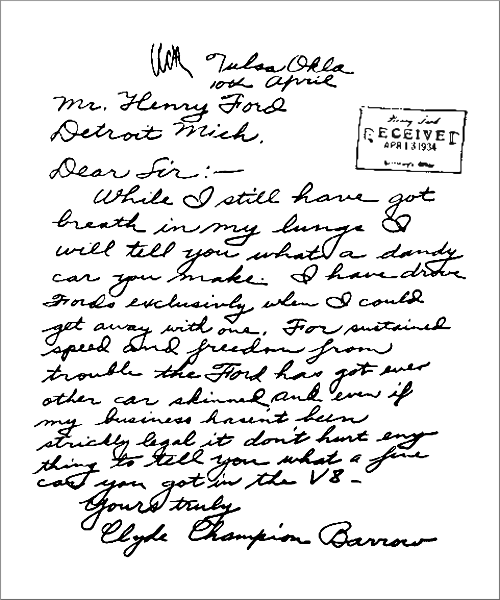 Handwriting experts dispute the authenticity of the Barrow letter. The cursive does not compare favorably with a letter Clyde wrote to his mother two years earlier, but the letter compares more favorably with Bonnie's handwriting. You be the judge! Compare the writing samples in the link listed below that includes a letter reputed to be sent to Henry Ford by John Dillinger.

Ford letter handwriting samples: http://texashideout.tripod.com/comparison.html
Posted by Gregory A. Fournier at 3:50 AM 7 comments 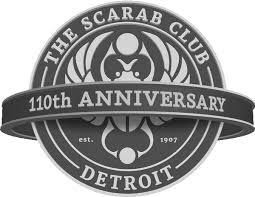 Despite celebrating its one-hundred and tenth anniversary as the center of Detroit, Michigan's artist community, the Scarab Club is relatively unknown to many people in the greater Detroit area. In its heyday, the club held themed costume balls annually from 1917 through the 1950s, with as many as 1,800 Detroiters in attendance.

To revitalize the club, current Executive Director Ashley Hennen told me when I visited in October that the club is rebranding itself to attract more local artists, art lovers, and the general public. In spring of 2016, the Mars Agency was hired to update the club's logo, their website, and their outreach programs. The club's new motto is We Know Detroit by Art.

The original club was named for master marine and landscape painter Robert Hopkins (1832-1909). After a successful showing of his work at The Detroit Museum of Art in 1907, Hopkins and his fellow artists formed an artists' club. They named the Hopkins Club in his honor. The original mission of the club has changed little over the years.


In 1913, the club changed its name to the Scarab Club and adopted the Egyptian symbol of rebirth--the scarab beetle--as its mascot. The three story brick building that currently houses the Scarab Club was designed by member architect Lancelot Sukert and opened in October of 1928. It is located at 217 Farnsworth Street amidst Detroit's Historic Museum District.

The exterior architecture of the building is Renaissance Revival. A glazed terracotta scarab emblem adorns the south facade. The club has a great deal of history and tradition. The building is listed on the United States National Registry of Historic Places, it is designated a Michigan Historical Site, and it is entered on the Register of Historic Buildings for Detroit.

The interior of the clubhouse is finished in the Arts and Craft style popular in the early twentieth-century. Club member Alfred Nygard carved and painted the scarab panel poised above the guest book as visitors enter the front lobby. The main floor is used as a gallery and performance area. The second floor was a members-only lounge in its early days. Above the fireplace is a mural painted on pine planks by Paul Honore in 1928 entitled "The Scarab Club Family Tree."

Early in the club's history, the ceiling beams of the members only lounge served as the club's guest book. Poet Vachel Lindsay is said to be the first to sign. Over two-hundred and thirty others have signed the beams including Norman Rockwell, Diego Rivera, Marcel Duchamp, William Milliken (Michigan governor), and John Sinclair. The third floor has six working studios not open to the public.

The Scarab Club was originally a men's-only organization. Women were not permitted above the first floor gallery. William Bostick joined the club in 1937 and acted as president and chairman of various committees. He was to become administrator of the Detroit Institute of Arts from 1946 until his retirement in1976. Bostick championed inclusion of women into the club. He remembered his mothers' disappointment when she was not allowed to practice her profession as an archeologist because women were forbidden to go on digs with men. Bostick shamed the club's board to include women for auxillary membership. Women were given full membership rights in 1962.

The Scarab Club serves the visual, the literary, and the musical arts. Since 1998, the club has instituted Chamber Music at the Scarab Club and the Blues Heritage Concert Series, but the original mission remains intact. The Scarab Club "continues to be a driving force in the artistic community and is proud to serve Michigan as a cultural stimulant for artistic diversity in the 21st century."

For more information contact: www.scarabclub.org
Posted by Gregory A. Fournier at 7:40 AM 0 comments