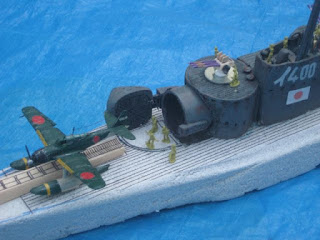 This is one of the best documentaries about the war in the Pacific. Attached is a fifty-three minute documentary about an incredible and unknown super weapon of World War II. Germany had the V-2 rocket, the United States had the atomic bomb, and Japan had the super-sub.

The Largest Submarine in World War II: https://www.youtube.com/watch?v=OPC51Mh-jtU
Posted by Gregory A. Fournier at 7:52 AM 0 comments 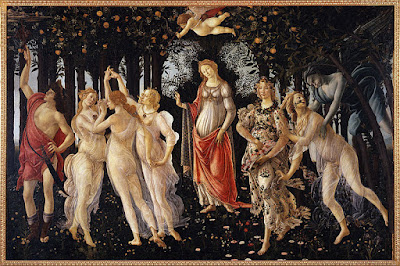 One of the loveliest expressions of springtime is the early Renaissance painting La Primavera (aka. Allegory of Spring) meaning literally "first green" by Italian painter Sandro Botticelli. It is believed he painted it in 1482. The painting hangs in the Uffizi Galley in Florence, Italy, and is a prized Italian national treasure.

Botticelli took his inspiration from the classical writing of the Roman Ovid and his description of spring. The central figure is Venus. To the right of the painting, the blue and chilly Zephyrus catches Flora and impregnates her and she morphs into a fertility figure. To the left, the Three Graces--Charm, Beauty, and Joy--dance as Mercury holds the clouds back from Venus' realm. A blindfolded Cupid seems up to mischief. That's what I see anyway.

For a more detailed analysis of the painting, check out this short link: https://www.khanacademy.org/humanities/renaissance-reformation/early-renaissance1/painting-in-florence/v/botticelli-la-primavera-spring-1481-1482

Posted by Gregory A. Fournier at 9:10 AM 0 comments

Looking Evil in the Face 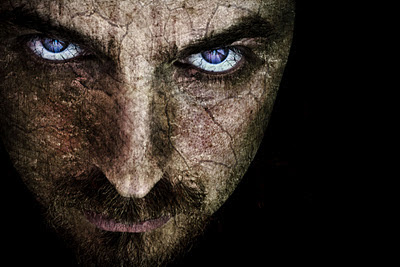 In act one of Shakespeare's Macbeth, the idea that guilt shows on a person's face is a motif that runs throughout the play. Lady Macbeth warns her husband early on "Your face, my thane, is as a book, where men may read strange matters." She advises him to "...look like the innocent flower, but be the serpent under't."

Macbeth has a conscience - Lady Macbeth doesn't. By the end of act one, he tries to take her advice, "False face must hide what the false heart doth know." A person with a conscience cannot pull that off - unfortunately, a sociopath can. By the end of the play, King Macbeth has become a serial killer, through his henchmen, of men, women, and children.


The idea that criminal traits can show on a person's face gained popular acceptance near the end of the nineteenth century. An Italian criminologist and physician named Cesare Lombroso was credited with the theory "...that some types of people are closer to our primitive ancestors than others." He utilized the work of Pierre-Paul Broca to create this "new science" of criminal anthropology which relied upon facial measurements and anomalies of the skull, face, and body to determine who was a criminal type and who was not.

Broca believed in the concept of the born criminal who was a "throwback to earlier hedonistic races." In the twentieth century, this theory was strongly reinforced in the popular culture through movies, dime novels, pulp fiction, radio mystery shows, and television crime dramas. Rather than scientific, these ideas broke along racial, ethnic, and religious lines more often than not. The Nazis made great use of this junk science which they proudly documented in the last century.

Today, crime science has reliable and irrefutable tools like fingerprints, DNA analysis, and chemical and fiber labs to help catch and convict sociopathic killers. The trouble is that someone must lose their life before any of this science can be put to work.

Understanding "the construction of the mind" simply by looking at someones physical traits does not work. Sociopaths who kill usually look normal and blend into the background, so their behavior often requires psychological profiling before they are caught. Regrettably, profiling only becomes more accurate as the body count rises.
Posted by Gregory A. Fournier at 2:24 PM 0 comments

Last week, I flew to Florida to visit my former English professor from Eastern Michigan University--Dr. Paul McGlynn. He earned his doctorate degree at Rice University in Texas and taught at Eastern Michigan for thirty-seven years, including the years during the Washtenaw County sex-slayings in the late 1960s.

We hadn't seen one another for forty years, but I knew Paul McGlynn had attended every court session of the John Norman Collins' trial and taken notes of the proceedings. His goal was to write a novel loosely based on the Collins' trial.

Author Edward Keyes was fresh off his success with the novel and movie The French Connection. As part of a multi-book contract, Keyes learned of the Collins' trial and the unsolved murders. He contracted with Simon and Schuster to write The Michigan Murders.

McGlynn read about Keyes' project in the Ann Arbor News, contacted him, and offered to help research his book. For an undisclosed stipend, McGlynn gave Keyes access to his trial notes. Much of what Keyes wrote regarding the trial comes directly from McGlynn's notes, and he gives McGlynn an acknowledgement in the introduction to The Michigan Murders.

Edward Keyes made an unfortunate editorial decision to use pseudonyms for the seven victims, their killer, and the witnesses. The overall effect was to obscure their identities and cloud the history behind these cases. Forty years later, people who lived through those times and were familiar with people involved with this case become confused after reading Keyes' novelization. 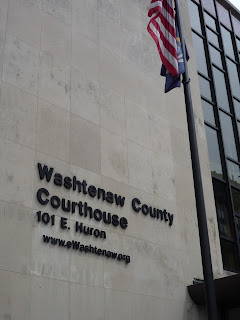 A debt is owed to history to get the facts straight. The Collins' trial was the longest and most expensive criminal proceeding in Washtenaw County history. After Collins' lawyers exhausted every appeal, the Supreme Court of the United States upheld the constitutionality of Collins' life sentence for first-degree murder. The high court returned the trial transcripts on April 19th, 1974. After that date, no mention of the transcripts is made in the county record log book.

After my researcher Ryan M. Place made an exhaustive statewide Freedom of Information search, the only response we received was from the Washtenaw County Clerk saying the records were "purged" in the mid-seventies. Why the county officials purged the trial transcripts is unknown. Surely, the historical significance of the case warrants that the public record be preserved somewhere--either in print or digitally.

Whether these documents were shredded for shelf space, misplaced through institutional neglect, or destroyed willfully to obfuscate the public record, the bottom line is they are missing. Meeting with Paul McGlynn was a unique opportunity to speak with someone who attended every court session. Collins is the only other person I know who was in court for all of the sessions, but he isn't talking.

My treatment of the trial is based on hundreds of vintage newspaper articles and interviews with some of the trial participants. The quoted dialogue from the daily reports is surprisingly detailed and helped me reconstruct the lost Collins' trial and the legal maneuvering that went on inside and outside the courtroom. Thank goodness for the press.

I asked Paul McGlynn if he would read my manuscript and question or comment on anything. I was most interested in his response to the trial. Here is what he wrote: "I'm wondering how you got the details of the trial so exactly. Did you finally manage to round up a transcript? It reads like a transcript, though of course much abbreviated. It brought back many memories of the long hours spent in the courtroom. Kudos."

Rather than dress-up this dark episode in Ypsilanti's history as narrative nonfiction, I decided to take a terse journalistic approach and retell the events as they happened. The facts and conflicts are enough to carry the story line without manufacturing melodrama.

With any luck, Terror in Ypsilanti: John Norman Collins Unmasked should be available in July 2016. I decided to change the title to make the book more suitable for internet searches.
Posted by Gregory A. Fournier at 7:13 AM 0 comments