Up and Down with The Three Stooges 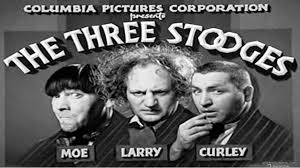 In 1932, Shemp left the act because he was fed up with Healy's alcoholism and abusive behavior. He pursued a successful solo career with Vitaphone Pictures in Brooklyn, New York--his hometown. The boys needed a quick replacement, so Moe suggested his younger brother Jerome.

Healy took one look at Jerome and said he didn't look funny. Jerome was too well-dressed and had a full head of chestnut-colored, wavy hair. Jerome left the room saying he would be back in several minutes. He returned with a freshly shaved head and a star was born. Jerome was given the stage name Curly. He was the original chowderhead and most popular of the Stooges. Untrained but with a flair for physical comedy, Curly's child-like mannerisms and natural comedic charm made him a fan favorite.

The team signed a contract with Metro-Goldwyn-Mayer lasting one year. Healy and his Stooges played bit parts of comic relief in half a dozen B-grade movies. The Stooges split with Ted Healy in 1934 and signed a one year contract with Columbia Pictures to appear in eight comedy short-subjects within a forty week period. The trio was paid $7,500 per film to divide among themselves. 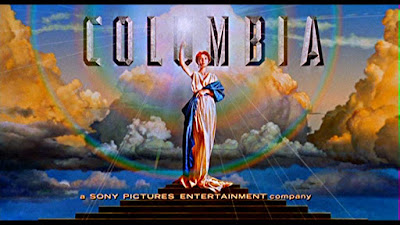 During their twenty-three years at Columbia Pictures, Moe Howard managed The Three Stooges--as they were now known. Moe was never fully aware of The Three Stooges' wild popularity at the box office or their income-earning potential. Every year, the boys had to sweat out whether they had a job or not. Studio mogul Harry Cohn complained the market for movie shorts was dying out. Moe never negotiated for a salary increase--nor were The Three Stooges ever offered one.

When they stopped making shorts in 1957, Moe finally realized what cash cows they were for Columbia Pictures. It was their cheap-to-make, two-reelers that kept the studio's gates open during the Great Depression and World War II. 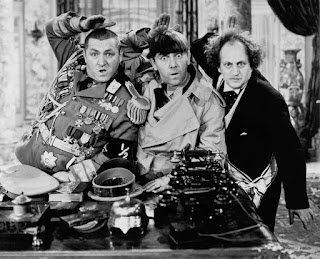 The Three Stooges shorts satirized greed, high society, health care, crime, the Depression, and World War II. The Stooges were the first Americans to take on Adolph Hitler and the Nazis. On January 19, 1940, Larry, Moe, and Curly ridiculed the German dictator in You Natzy Spy. Although not considered one of their finer efforts, it would be almost two years before the United States' entrance into World War II.

In the 1940s, Curly's weight ballooned from overeating and drinking. By 1945, he had trouble remembering his lines. He was lethargic. His voice was deeper and strained. He couldn't do the high-pitched woo-woos and n'yuk-n'yuks anymore. Doctors discovered Curly had had a minor stroke. The following year, a massive stroke ended his fourteen-year-long career. At the end of his life, he could only communicate with Moe by squeezing his hand or blinking his eyes. Jerome (Curly) Howard died in 1952 of a cerebral hemorrhage at age forty-eight. He appeared in ninety-seven Columbia shorts.

Moe asked his older brother Shemp to reprise his role as an original Stooge. He had a successful solo career but returned in 1947 to keep the act alive. After Curly's last few sluggish performances, Shemp injected some zany vitality into the series. Larry Fine was also given more screen time.

Shemp was with the act when The Three Stooges made their first television appearance on Milton Berle's Texaco Star Theater in 1948. Their slapstick brand of short sketch comedy was well-suited for variety shows. Because there was no backlog of television programming, they were in great demand to fill air time. The Three Stooges became reacquainted with their core audience. Three years after Curly passed, Shemp died of a massive heart attack at age sixty in 1955. He appeared in seventy-seven episodes. 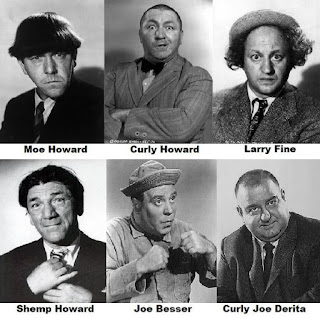 Moe Howard and Larry Fine lived for twenty more years and continued to work with several other replacements. Larry died of a stroke at age seventy-two in January 1975; Moe died of lung cancer at age seventy-seven in May 1975.

In January of 1955, Screen Gems--a Columbia Pictures television subsidiary--began packaging The Three Stooges for the television market. Because of the large body of material--190 shorts--shows were broadcast Monday through Friday in syndication across the country. This heavy exposure led to a new generation of Stooge fans--the Baby Boomers.

Although The Three Stooges were never a hit with critics, they outlasted all their contemporaries. They are beloved by generations of Americans and respected for their large body of work. In 2000, ABC aired a made-for-television The Three Stooges bio-pic telling their story through the eyes of Moe Howard. I thought it was quite good. Evan Handler played Larry, Paul Ben-Victor played Moe, Michael Chiklis played Curly, and John Kassir played Shemp.

In 2012, Twentieth Century Fox released their The Three Stooges movie to a world-wide audience reigniting the global popularity of one of the greatest celebrity brands. This film is divided into three episodes--similar to how the shorts were packaged for television--and attempts to recreate the classic act.

The list of supporting actors is impressive: Jane Lynch, Sofia Vergara, Jennifer Hudson, Kate Upton, Larry David, among others. The first movie was successful enough to warrant a sequel. On May 7, 2015, Fox studios announced that Sean Hayes as Larry, Will Sasso as Curly, and Chris Diamantopoulos as Moe will reprise their roles.

Steve Allen narrates a Three Stooges bio:
https://www.youtube.com/watch?v=Q0rpy8TCJgY
Posted by Gregory A. Fournier at 5:27 AM 0 comments 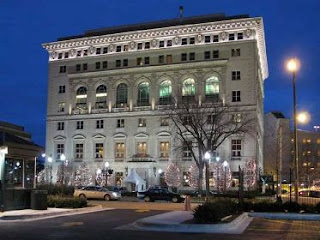 The Detroit Athletic Club (DAC) is a private social club in the sports and entertainment district of downtown Detroit. Its doors opened April 24th, 1915. The club celebrated its centennial this year with the dedication of a 2.3 million dollar sculpture project commemorating the club's original mission--supporting amateur athletes.

Many Metropolitan Detroit residents are unfamiliar with this Detroit institution, located at 241 Madison Avenue on the corner of John R. Street. Today, DAC claims forty-four hundred members from two thousand companies. Twenty-nine hundred resident members have voting rights and--at last report--pay a $3,500 entrance fee and $300 to $400 dues per month, depending on the level of membership. The club has four hundred intermediate members (ages 21-33) and eleven hundred non-resident members scattered around the country and internationally.

The DAC survives on membership dues and new growth. The club encourages the families of its members to participate in club events and fundraisers. The sons and daughters of Detroit's business elite comprise a good portion of DAC's intermediate membership. Their children benefit from this arrangement as they have for generations.

Henry Ford was an original member, as has every generation of his descendants since. The DAC has been the most prominent locale for Detroit's business power-brokers to network with the city's movers and shakers. The club's founding members once controlled ninety percent of the world-wide automobile business. Many of the economic decisions affecting the Detroit area were discussed over cocktails at these exclusive gatherings.


During much of DAC's history, Jews, African-Americans, and women were denied membership. One by one, those barriers were overcome. In 1986, women were finally admitted and currently make up twelve percent of the club's members. Today's club is trying to shed its good old boy heritage.

A strict application process is in effect. Potential members must have a sponsor, six members to write recommendation letters, an intensive interview, and approval by DAC's membership committee. This private club reserves the right to deny membership to anyone.

Earlier this year, Geoffrey Fieger--best known as Dr. Jack Kevorkian's lawyer--was summarily rejected after filing for club membership. Fieger's sponsor delivered the bad news personally. The DAC never sent a formal letter of rejection nor was Fieger told why he did not measure up.

When asked why he was rejected, Fieger commented, "The DAC has a long history of bigotry, and I'm a lawyer for the underdog. The club's hierarchy are deeply ensconced in that old tradition."

Posted by Gregory A. Fournier at 6:48 AM 0 comments

The Ypsi-Ann Trolley - Maybe What's Old Can Be Made New Again! 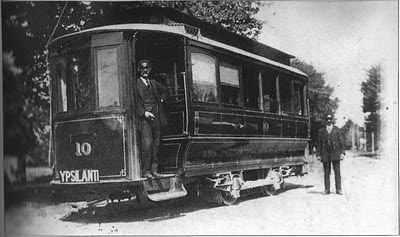 While doing some research on Washtenaw County, Michigan, for my next book - The Rainy Day Murders - I came across an interesting tidbit of history about the Ypsi-Ann trolley which linked the campus of Michigan State Normal College in Ypsilanti with the campus of the University of Michigan in Ann Arbor some nine miles away.

This early mass transit service was popular, and at its height served approximately 600 people a day. Trains operated every ninety minutes at an average speed of eight miles per hour. The original fare was a thin dime. Despite frequent breakdowns and delays in its schedule, the line got plenty of use from U of M students, who were mostly young men--and from the Normal College students, who were mostly young women. It was said that on the weekends, a rough parity was achieved.

Established in 1889, this extension of Detroit's longer Interurban line was steam powered. Because Ypsilanti's population could not support its own streetcar system, a seven and a half mile line was built the following year connecting Ypsilanti's downtown with the outskirts of Ann Arbor. Ypsi-Ann trolley owners petitioned the Ann Arbor Common Council to extend the line into the city. The steam powered engine was designed to look like a street car on wheels, so it would not scare the horses. It could haul as many as four trailers.

But Ann Arbor residents opposed the noisy and dirty steam locomotives. Arrangements were made with the Ann Arbor Street Railway Company for its cleaner and quieter electric cars to meet the Ypsi-Ann at the city limits and transfer passengers. In November of 1896, the Ypsilanti and Ann Arbor route was fully electrified opening a direct connection between the cities without a transfer. 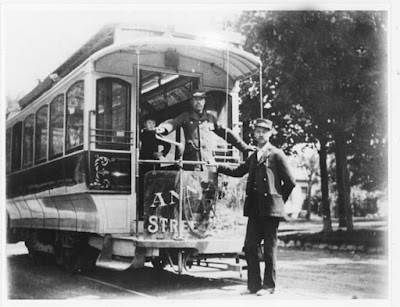 The trolley service continued to operate until 1929. As the trolley made horses obsolete, cars and bus service made the trolley obsolete. Most of the line's tracks were pulled up in World War II for scrap metal drives. It was believed all of the Ypsilanti tracks were removed, but in 2004, road construction crews found a stretch of track on Washington Street buried under the pavement.

Today, anyone who drives down Washtenaw Avenue can attest to the congested traffic between the cities. Too bad an old idea can't be made new again--or maybe it can. What about a solar powered mono-rail with electromagnets or some hybrid energy backup built over existing right of way?

America needs new technology. Why shouldn't Washtenaw County be the developmental center for a new age in transportation? Ann Arbor has the technical resources and Ypsi has the manufacturing facilities and know how. Create the new technology, build it in the old Ford plant, and ship it across the country and the world.

This could be the hottest commercial venture for the area since the development of the Ypsilanti union suit with the flap in the back--a well-known and sought after product across America in the nineteenth century. Look to the future.
Posted by Gregory A. Fournier at 6:23 AM 0 comments