On October 20, 1960, presidential candidate John F. Kennedy's motorcade was stopped at about 1:10 AM by Eastern Michigan University students who jammed West Cross Street in front of McKinny Student Union. Kennedy was on his way to a political rally in Ann Arbor the following day.

He made a two or three minute speech telling the cheering crowd of students that he stood "for the oldest party in years, but the youngest party in ideas." Because of the late hour, the soon-to-be president asked to be excused explaining he had a difficult schedule planned for the next day. 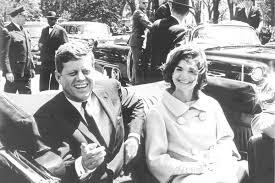 In his inaugural speech on January 20, 1960, the new president boldly stated that "a torch has been passed to a new generation." Three years later, on Friday, November 22, 1963, at 11:30 AM, an assassin's bullet cut down President Kennedy in Dallas, Texas while he was campaigning for a second term. He was pronounced dead on the operating table thirty minutes later.

At 1:00 PM, the intercom system at Allen Park High School broadcast the sound of Walter Cronkite announcing John F. Kennedy, thirty-fifth president of the United States, had been assassinated--then he paused. The principal came on and asked for a moment of silence.

I was in sophomore biology class. The shocked silence was punctuated first by whimpering and then open sobbing. This was a defining moment for an entire generation. A mourning wind swept over the nation and the world held its breath.

After two years, ten months, two days, and sixty-nine minutes, Kennedy's torch of optimism was extinguished. But his challenge to America had been met--putting a man on the moon before the end of the decade. The technical breakthroughs from that achievement still benefit mankind. 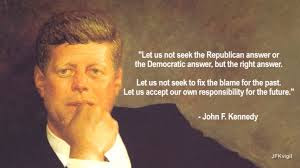 Posted by Gregory A. Fournier at 4:28 PM 0 comments


On the day of John Norman Collins' sentencing for the murder of Karen Sue Beineman--August 28, 1970--The Ypsilanti Press reported rewards for information leading to the arrest of the killer or killers of seven women in the Ypsilanti/Ann Arbor area had reached $43,500. The rewards came from a variety of sources--each with its own conditions for pay out.


When questioned by the press the day before Collins was sentenced, Prosecutor William Delhey said, “If there is one person who triggered the events which led to the arrest of Collins, it was Eastern Michigan University Police Officer Larry Mathewson. I have to give a great deal of credit to Mathewson.” High praise indeed for a rookie cop on a university police force who used an old-fashioned police technique--he followed a hunch and started knocking on doors. Delhey was clearly grateful.

During the cross-examination of Mrs. Diane Joan Goshe, one of the two women who identified Collins driving away with Miss Beineman on the motorcycle, defense attorneys badgered her about the reward money. On the stand, Goshe said she had not given any thought to claiming the reward and "hadn’t really checked into it."

Ann Arbor News reporter William Treml wrote that the “most eligible” persons for the reward were the two wig shop ladies—Diane Joan Goshe and Patricia Spaulding—whose eyewitness accounts linked Collins with Beineman. “Without their testimony, it is doubtful the prosecution would have obtained a conviction.”

The defense team of Joseph Louisell and Neil Fink tried to plant the impression in the minds of the jurors that the reward money was their key motive for testifying. At one point, Fink asked Mrs. Spaulding if it was not true she and Mrs. Goshe discussed dividing up the reward. Mrs. Spaulding answered emphatically, “No!”


On December 19, 1970, The Ann Arbor News reported Mrs. Goshe had hired the law firm of Keyes, Creal, and Hurbis, to mail letters of inquiry to several public agencies offering reward money. William Delhey ordered an investigation into the status of the reward money. When it was all added up, the conviction reward was small for the Beineman murder. Most of the original offers were no longer available because of restrictions placed by each organization on the reward. Collins was not charged with the other deaths for which the money was set aside.

On February 16, 1971, the Washtenaw County Board of Commissioners recommended the denial of Mrs. Goshe’s claim for the $2,000 the county offered. Writing the legal opinion for the committee, Prosecutor Delhey noted “the reward was offered June 3, 1969, for evidence leading to the conviction for any of the slaying victims of young women committed up to then. Mrs. Goshe testified on the murder of Karen Sue Beineman, and that case came about a month and a half after the reward was offered. Thus, her testimony did not result in any convictions for the still unsolved five murders that preceded the reward offer.

Delhey added, “Even if the murder of Miss Beineman was included in the reward offer, the evidence that led to the conviction of Collins came to light through the work of Eastern Michigan University Policeman Larry Mathewson.”

Ironically, the women whose testimony helped Delhey win the biggest case of his career were cut out of the reward money by his recommendation. Mathewson was also ineligible for the reward because he was a member of law enforcement and on the public payroll at the time.

Mrs. Goshe was portrayed by the press as trying to profit from the misery of the Beineman family, but she and Patricia Spaulding bravely stood up, cooperated with police, and testified in open court. Both ladies performed laudable public service and came forward when others who knew things did not.

And what was Mrs. Goshe’s reward for sticking her neck out? The defense team publicly dissected her private life revealing a family secret that had nothing to do with the trial and did nothing but hurt a mother and her twelve-year-old son. She was not married to the boy's father. No good deed goes unpunished.
Posted by Gregory A. Fournier at 3:25 AM 0 comments 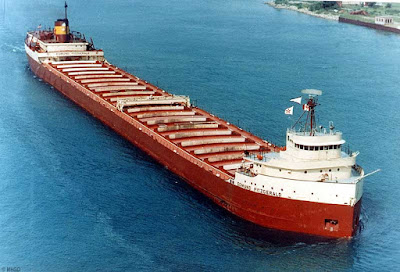 November 10, 2015, marks forty years since all twenty-nine crew members went down with their ship--the S.S. Edmund Fitzgerald. The largest of the Great Lakes ore freighters at the time of her sinking, she was dubbed "The Queen of the Great Lakes." The ship was 729 feet long, 39 feet high, and 75 feet wide.

The S.S. Edmund Fitzgerald was loaded in Superior, Wisconsin with 26,000 tons of taconite (iron pellets) headed for the ore docks of Zug Island--just south of Detroit. Winds over 45 knots (50 mph) and waves over 30 feet caused the ship to roll heavily. The captain made a call to another ore freighter saying they had taken on some water but were holding their own. That was just before the ship went off U.S. Coast Guard radar. The pride of the Great Lakes broke in two and sank 530 feet into Lake Superior's Canadian waters--only seventeen miles from protected Whitefish Bay. 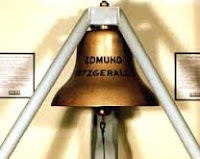 Since the submerged giant sank on November 10, 1975, there have been three underwater expeditions--in 1989, 1994, and 1995. At the request of the families who lost their loved ones, the Canadian government recovered the 200 pound brass bell from the deck of the S.S. Edmund Fitzgerald on July 4, 1995, and presented it to the Great Lakes Shipwreck Historical Society.

Today, the bell is displayed at the Great Lakes Shipwreck Museum in Whitefish Point, Michigan. Every November 10th at 7:10 PM, the bell is tolled twenty-nine times to honor the Fitzgerald's crew and a thirtieth time to commemorate the estimated 30,000 people and 6,000 ships lost in the Great Lakes. 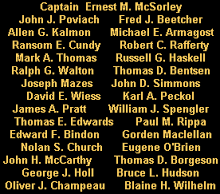 Gordon Lightfoot's The Wreck of the Edmund Fitzgerald with documentary footage: https://youtu.be/hgI8bta-7aw

Posted by Gregory A. Fournier at 6:32 AM 0 comments