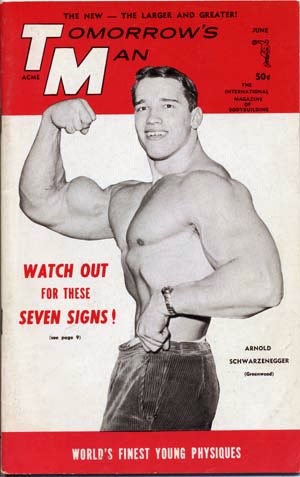 In January of 1969, John Norman Collins did three photo shoots for a pocket-sized body building magazine entitled Tomorrow's Man (1952-1971). The popular subtitle for this "beefcake" magazine was "Hunks in Trunks." Readers may recognize the names of Steve Reeves (Hercules) and Arnold Schwarzenegger (The Terminator) as people who have posed for this periodical. The pictorials and covers featured prominent bodybuilders and amateurs.

This pulp fiction relic was particularly popular in the 50s and 60s among gay men and curious newcomers. It was considered a crossover publication which could be found on newsstands in urban areas across the country, or it could be mail-ordered discreetly from home.

In a prison letter written July 15, 2013, John Norman Collins tells his Canadian cousin the story of his brief involvement in the world of bodybuilding modeling.

[The following excerpt is presented essentially unedited as written.]

"Oh my God, you found those pictures of me in that "Tomorrow's Man!" ha, ha. Those were taken when I was at Eastern Mich. University. I was a Junior I believe [January 1969]. The media tried to PLAY IT UP after my arrest and make me seem GAY. Here's the SCOOP, John [Collins' Canadian cousin]. I was a JOCK in college and loved all sports so I joined a JOCK Fraternity [Theta Chi] that had lots of football players, wrestlers, baseball players, etc. Well a couple of Brothers told me about this guy that took photo's of guys for some weight-lifting magazines and it paid really good for just 1/2 hour of work. I went to the studio with a few Brothers and I saw what they really did and I agreed to do it. I did like maybe 3 sessions and forgot all about it. I knew the photographer could use my photo's in any magazine he wanted to and he used Bill Kenyon as my name. I have no idea WHY he did that? Anyhow, he used guys from the wrestling team, swim team, etc. Anyone that was in decent shape. At the time he told me he would try to get me into modeling jobs (clothing), BUTT, that didn't happen. How many pictures were in the mag.? I'll never be an "Arnuld." ha, ha. Maybe I should have you send me a copy of the photo(s) they used in the mag.? :) Just curious! I lifted weights for football, hockey, baseball etc., NOT really to be a bodybuilder. Just want some size & strength."

Tomorrow's Man used only one of the photos from Collins three separate shoots, for which he was paid $5.00 a session. "Teenage bodybuilder" Bill Kenyon was, of course, twenty-one year old John Norman Collins. In addition to the photograph, which was placed to the right of an advertisement for wheat germ capsules, the photo's banner read "GREAT FUTURE."

Two Eastern Michigan University coeds had been murdered in Washtenaw County prior to the Collins photo sessions. Five additional unsolved murders of young women occurred in the nine months after Collins posed for Tomorrow's Man magazine. Only for the last of these brutal serial killings would John Norman Collins ever be tried and convicted. The six other cases have hung in limbo for almost fifty years.

For more examples of Tomorrow's Man covers, tap on the following link: http://www.pulpinternational.com/pulp/entry/Assorted-covers-of-Tomorrows-Man-bodybuilding-magazine.html

For more information about Beefcake magazines, tap on this link: http://www.bilerico.com/2011/02/a_short_history_of_physique_magazines.php
Posted by Gregory A. Fournier at 2:29 PM 0 comments