Twelfth Night--Gender Bending at The Old Globe in San Diego 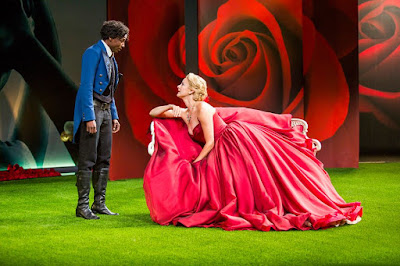 The Old Globe Theater's opening night of Twelfth Night--Shakespeare's gender bending romantic comedy--couldn't have been more timely given the recent Gay Marriage Supreme Court ruling. With the GLBT banner waving from the California Tower in Balboa Park, these talented actors--under the skillful direction of Rebecca Taichman--brought that madness we call love, in all its ridiculous splendor, to the outdoor Festival Stage in San Diego.

My wife and I attended an Old Globe fund raising dinner before the show with many of San Diego's theater glitterati in attendance, not least of whom was Marion Ross of Happy Days fame. Miss Ross is a local San Diego girl who first appeared on the Old Globe Festival stage in 1949 as Olivia in Twelfth Night. Miss Ross was seated directly in front of us and intently focused on the performance. I caught her quietly reciting the lines a couple of times.

As she was walking up the aisle at play's end, I offered her my arm for the long trek up the stairs. She smiled and said, "Please."

I'm hear to tell you that Mrs. C. is just as charming in person as she was when she appeared in America's living rooms with Richie and the Fonze. 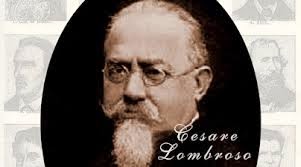 In the late nineteenth century, Italian psychiatrist Cesare Lombroso was credited with the theory that some types of people are closer to our primitive ancestors than others. Dr. Lombroso utilized the work of anthropologist Pierre-Paul Broca which relied on facial measurements and anomalies of the skull, face, and body to determine who was--or was not--a criminal type. 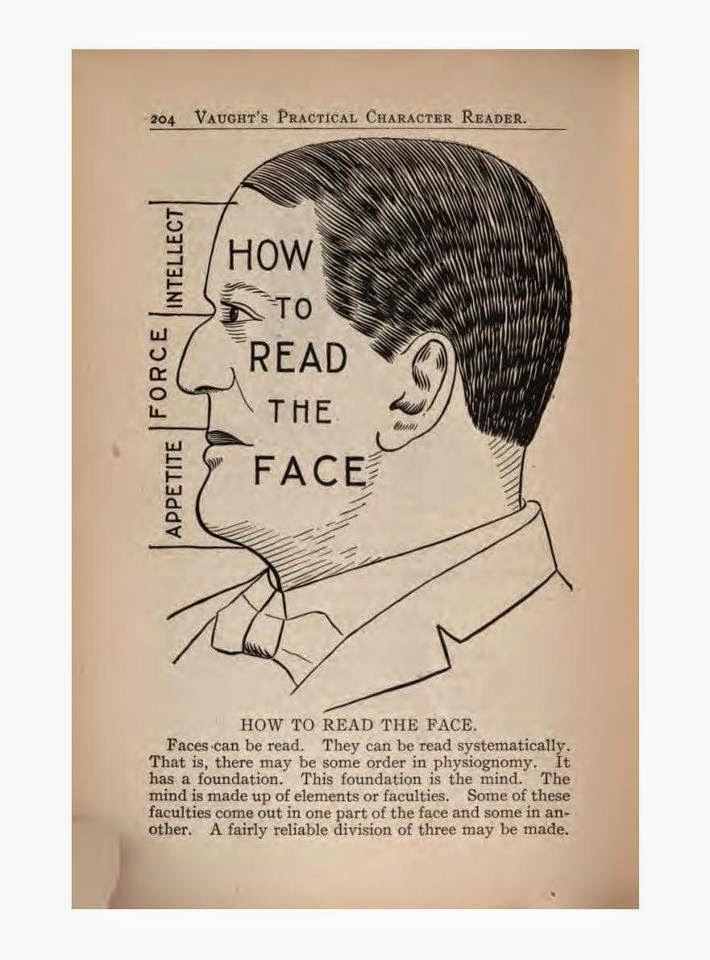 Lombroso based his theory of the born criminal--who was a throwback to earlier hedonistic races--on hundreds of post-mortem examinations of criminals. He compiled a list of criminal traits which included receding hairline, forehead wrinkles, bumpy face, broad noses, fleshy lips, sloping shoulders, long arms, and pointed fingers. This condition was named atavism and was strongly associated with Charles Darwin's Origin of the Species--published in 1859. The belief that there was a face of evil was an easy one for society to accept in the Gilded Age of Queen Victoria.

In the twentieth century, this theory was strongly reinforced in the popular culture through cinema, novels, radio mystery shows, and television crime dramas. Of course, some common criminals undoubtedly conform to the stereotype of the dumb hoodlum by virtue of their less than average intelligence and their need to follow a charismatic leader, popularly known as the Boss or the brains of the outfit. This folklore gives rise to the idea that criminals--psychopaths among them--are easily identified because they look different from normal people. 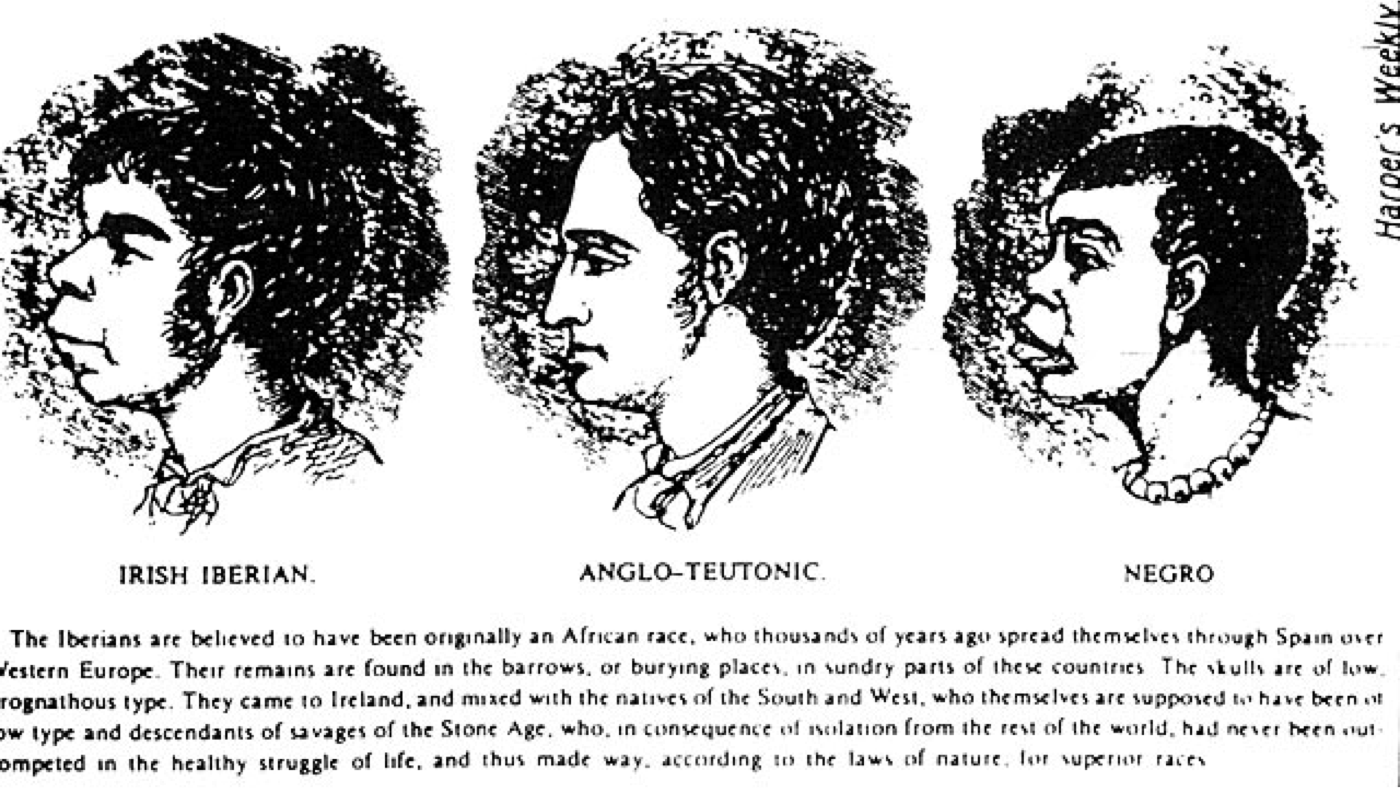 Rather than scientific, these ideas broke along racial and ethnic lines, and in nineteenth century America, religion was also a prejudicial factor in determining guilt. It was believed that Catholics and Jews bore a greater responsibility for crime, in cities like Boston and New York, than the hard working Protestant folk. The Nazis made great use of this type of junk science against European Jews, which they proudly documented for the world to see in the last century.

Serial killers are cut from different cloth than common criminals. Psychologists have done extensive studies on this unique category of murderer. Their studies have discovered that they tend to be above average in intelligence and some are gifted. These are people who often have a belief that their intellect exempts them from the rules and regulations that were devised to keep less intelligent people in line--an attitude of entitlement develops. Their intelligence allows serial killers to tidy up evidence, dispose of the body, and return to their normal façade of life until the urge falls upon them to strike again.

Understanding the construction of the mind simply by looking at physical traits doesn’t work. Serial killers often look normal and blend into the background, so their behavior often requires sophisticated psychological profiling before they are caught. Regrettably, profiling only becomes more accurate as the body count rises, sometimes not even then.

Everything about serial killers is frightening. But the most disturbing thing of all is that they look just like the rest of us. These people are often superficially described as charming or engaging.

Even after the outrages of serial killers have been discovered, many people are dumbstruck despite the evidence that a normal looking person could be responsible for such carnage. It is part of the Dr. Jekyll and Mr. Hyde quality of their personality disorder that enables serial killers to deceive people so easily. They are natural actors because deception and manipulation are second nature to them.

The true beginnings of modern crime fighting:
http://fornology.blogspot.com/2014/05/the-vidocq-society-private-crime.html
Posted by Gregory A. Fournier at 10:02 AM 0 comments

Inside the Mind of The Curious Incident of the Dog 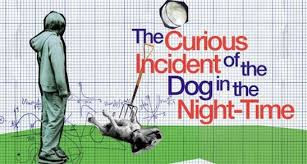 Last week, I saw an amazing play in New York with the most creative use of theater space I've ever seen. The Curious Incident of the Dog in the Night-Time is a National Theatre production based on a 2003 mystery novel of the same name by Mark Haddon. The original London production--now running on Broadway--won seven Olivier Awards in 2013.

What first appears to the audience as the chaotic thoughts and erratic behaviors of a fifteen-year-old male with Asperger syndrome, proves to be a journey through the mind of someone who is a math savant. But this is neither a play about Asperger syndrome nor math. It is about Christopher Boone's investigation into the pitchfork murder of his neighbor's dog that leads to a larger mystery he is determined to solve.

Several days after I saw the play, I was thinking about the inventive set. Duh! It finally struck me. The stage is a representation of Christopher's mind. The mystery unfolds on stage with the background, left and right sides, and the floor configured like graph paper. The open ceiling shows the limitless night sky and the scope of the boy's ambition. The lighting effects and the tech work behind this production are an eye-popping assault on the senses. 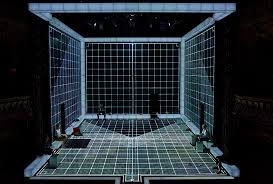 This metaphoric construct depicts the inner reality of an autistic teenager who discovers much more than he could ever imagine. He can interpret only the literal and not the figurative. When Christopher sets out in search of his mother, he must interact with the London Underground system for the first time in his life. Navigating the subway for most people is nothing more than a routine nuisance, but for Christopher, it is a harrowing ride towards self-discovery.


I expect this mystery drama will do very well Sunday night at the 2015 Tony Awards. http://www.curiousonbroadway.com/
Posted by Gregory A. Fournier at 9:56 AM 0 comments