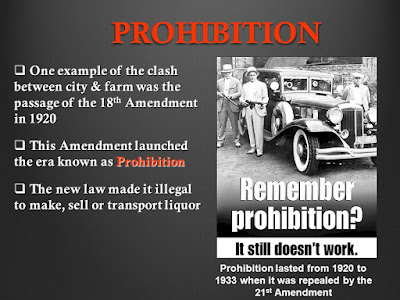 With the passage of the Eighteenth Amendment to our United States Constitution and the Volstead Act on October 28, 1919, the manufacture, sale, and distribution of intoxicating spirits was made illegal in the United States. The Prohibition Act went into effect in 1920 and pushed the consumption of booze underground, creating the Roaring Twenties and the age of the big city gangster. 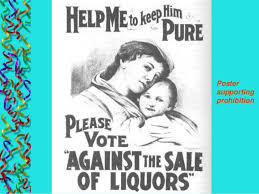 Seen as a "Noble Experiment," Protestant, Baptist, and women's Temperance groups believed that Prohibition would improve American life and guide our nation towards prosperity and morality. The evils of alcohol were readily visible with scenes of public drunkenness, violence, and domestic abuse of women and children commonplace events. 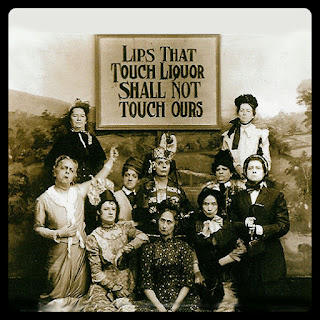 Henry Ford was a strong advocate of the Temperance movement hoping to improve the attendance of his workforce--many of whom were drinkers of alcoholic beverages. The Klu Klux Klan was also a supporter of the movement for anti-immigrant reasons. Anti-German sentiment after World War I was unsympathetic with the German tradition of beer drinking. The Irish Catholics had a taste for hard liquor while Italian and French Catholics enjoyed their wine. All were opposed to the alcohol ban on cultural grounds. 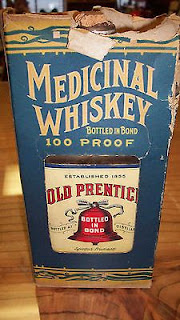 A loophole in the Volstead Act did not specifically prohibit the use of intoxicating beverages. Physicians were allowed to prescribe whiskey for medicinal purposes. Patients could buy a prescription from a doctor for $4.00 and then take it to a pharmacy to be filled. Doctors were doing a box-office business. Because of rampant abuses in the first years of Prohibition, a law was passed to allow physicians to write no more than fifty prescriptions per year and patients could obtain no more than one gallon of whiskey per month.

Homemade wine and apple jack could be produced for personal consumption so farmers and home vintners could preserve their grape and apple crops over the winter months. Sacramental wine for religious purposes was also allowed to placate Catholic and Jewish voters.

Prohibition began the era of smuggling distilled liquor from Canada, Cuba, and the Bahamas. There was also wildcat liquor production in the form of moonshine and bathtub gin. Moonshine production increased in Appalachia in the backwoods and hollows of the Smokey Mountains. Farmers realized that converting their corn crops to alcohol was ten times more profitable than transporting sacks of grain for human or animal consumption.
To increase production and profits, some moonshiners used old automobile radiators for condensation units and switched from corn mash to pure sugar. Because of unsanitary conditions and contaminated backwoods stills, many drinkers of moonshine went blind from glycol and lead poisoning, prompting the expression "blind drunk." The stronger the "shine," the higher the proof--180 proof meant that the liquor was 90% alcohol and 10% water. Commercial liquor is typically 80 proof with 40% alcohol and 60% water. The strength of moonshine earned it the name White Lightening.


Enterprising city dwellers also began making a concoction called bathtub gin. Five gallon steel containers of cheap grain alcohol were poured into a tub. Tap water was used as a cutting agent at a ratio of one part alcohol to three parts water to stretch the supply. Then, flavoring agents such as juniper berry juice or fruit juice was added. For color and aging, a few drops of coal tar extract would do nicely as would burnt sugar. Then, the mixture was hand-bottled in used liquor bottles or relabeled with counterfit brand names and sealed with phony Federal liquor commission stamps.

Because of increased demand, the general quality of homemade liquor declined during Prohibition and was harsh to the taste. This created the popularity of the cocktail and the highball to cut the bitterness of the hooch. In those days, cocktails contained three or more ingredients--alcohol, a source of sweetness (honey, sugar, or molasses), and a bitter/citrus flavor to mask the harshness. Highballs were simply liquor and a mixer like 7-Up to flavor and dilute the alcohol.

The following link from the History Channel gives a three minute, animated survey of Prohibition in America. Wait for the ad to run: https://www.history.com/topics/roaring-twenties/prohibition/videos
Posted by Gregory A. Fournier at 9:04 AM 0 comments

The Outrage and the Nature of Truth 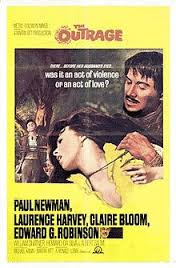 One of Paul Newman's least known and seldom shown films is The Outrage (1964). The film explores the elusive nature of truth as five conflicting versions of the same crime are presented to a frontier judge before a burned out courthouse. The film is an adaptation of Japanese director Akira Kurosawa's Rashomon (1950). 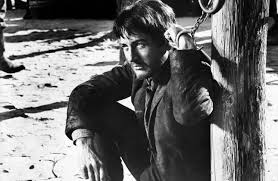 Newman plays the unlikely role of Juan Carrasco, a Mexican outlaw accused of raping a Southern belle and killing her aristocratic husband. The beguiling Claire Bloom plays the violated woman, and Laurence Harvey plays her Southern gentleman. Despite the lurid subject matter, Newman, Bloom, and Harvey give tongue and cheek performances in episodic flashbacks which entertain in unexpected ways.

Rounding out the cast is Edward G. Robinson as a cynical, larcenous gambler. His performance may be one of his best as he shines throughout the film. William Shatner plays a frontier preacher who has lost his faith after he hears the conflicting trial testimony. His performance is subdued and pensive making Robinson's portrayal of the sleazy conman all the more compelling. Howard Da Silva plays a down-on-his-luck prospector undergoing a moral crisis. He has withheld important evidence by not testifying at the trial. 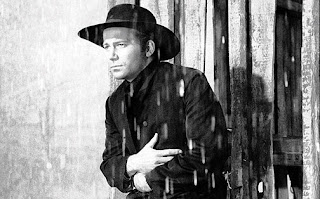 The three men are waiting overnight in a rundown train depot for the next train out of town. A driving rainstorm sets the somber tone for the movie. As the three men discuss the Carrasco case, director Martin Ritt intersperses flashbacks depicting the various points-of-view which have as much to do with the truth as the basic facts of the case.

The Outrage is a provocative and thought-provoking movie filmed in the Sonoran Desert near Tucson, Arizona. Every Paul Newman fan should see this film at least once.

Trailer for The Outrage: https://www.youtube.com/watch?v=zt9xrEjQZPg
Posted by Gregory A. Fournier at 11:33 AM 0 comments


During the United States Prohibition period, the majority of liquor passing through Windsor, Ontario and the Border Cities into the United States came across the Detroit River. The United States Customs Department estimates that 80% of all illegal spirits brought into the country during Prohibition originated in Canada--our neighbor to the North. This "Detroit Funnel" as it became known in the press supplied liquor to Chicago, Lansing, Toledo, Cleveland, St. Louis, Kansas City and all points in between.

When Ontario passed the Ontario Temperance Act in 1916, the province closed the bars, clubs, and liquor stores until the end of World War I. The government needed the grain for the war effort. But with the end of the war, the Canadian government repealed wartime Prohibition and liquor began to flow again in the Dominion. 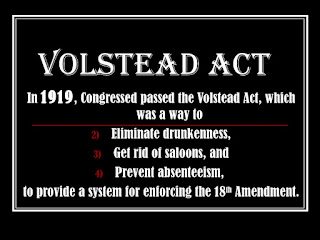 Meanwhile, the United States Congress passed the 18th Amendment--otherwise known as the Volstead Act--on October 28, 1919. The act banned the manufacture, transport, sale, import, export, and delivery of alcohol spirits within its borders. The bootlegger, rum runner, and flapper were born. The easy market and close access to Detroit became the focal point for shipping illegal booze into the United States from Canada. Historians labeled the age The Roaring Twenties--when organized crime flourished on both sides of the International Border.

Under pressure from vocal Temperence groups on both sides of the International Border, Ottawa passed Bill 26 decreeing that each province could prevent the importation of liquor by holding a referendum vote. The rest of Canada voted dry leaving Ontario to stand alone. The province did vote to approve the Sandy Bill on July 19, 1921 which disallowed the movement of liquor within Ontario without an order of the Board of License Commissioners.

Jim Cooper--Belle River and Walkerville roadhouse owner and illicit liquor dealer--figured out that if he set up an export business in Detroit, he could circumvent the Ontario law. Canadians would place an order through a Detroit telephone number. The purchased goods were not imported into Ontario. The liquor was already in Windsor and Walkerville warehouses. Because the purchase was made out of the country, it was perfectly legal to be delivered within Ontario. 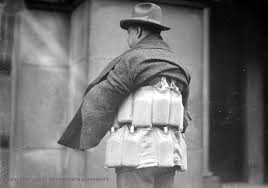 During Prohibition, six distilleries and twenty-nine brewers operated within Ontario all licensed by the federal government. It is estimated that forty million dollars of booze illegally crossed the border every year. At first, there was a lot of small-time suitcase smuggling for personal use. All manner of devices were contrived to conceal bottles. Some people strapped bottles under their clothing, pints were slid into high boots, and cars were fitted with hidden compartments.

After organized crime wrestled control of the river from small-time operators, much of the liquor was smuggled in by the boat load. In the winter, old jalopies, trucks, and sleds scurried across the frozen river to engage in the illegal trade. When the U.S. Coast Guard built up their fleet with 200 h.p. patrol boats hoping to dominate the river traffic, the Purple Gang's Little Jewish Navy bought specially outfitted speed boats and mounted small cannons on their bows with Tommy Gun-toting crews to harass the authorities leveling the playing field. The Purple Gang laid claim to the Detroit River as their territory. Any freelance bootleggers unlucky enough to be caught smuggling by the gang lost their booty and often their lives. The Purple Gang alone is credited by police with the murder of over 500 people during their bloody reign of the Detroit underworld. 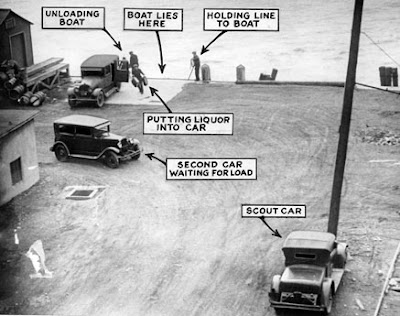 Earning the big money became possible because of a gaping loophole in the Canadian law. Large quantities of liquor could be bought from Canadian distilleries for export purposes if purchasers or their agents carried a Canadian Customs B-13 export clearance document certifying that the buyer was exporting liquor anywhere but a country where Prohibition was the law. Shipments were marked for Europe, Cuba, and South America. But once a boat left the loading dock, the Canadian government was unconcerned where it actually moored and unloaded. The burden of enforcing this American law fell squarely upon the United States, and the Dominion felt no obligation to enforce the laws of their sovereign neighbor.

The boxes and barrels of liquor were distributed to Ontario Border City export docks strung out along the length of the Detroit River. Rum runners from Detroit would cruise across, load up their boats, and make their river runs--mostly at night. In the winter, the shipments were loaded on the frozen Canadian river bank awaiting their mass exodus across the International Border.

Some of the diverted illegal liquor stayed in Canada by sailing directly into slips behind Ontatio's chain of roadhouses stretching from Windsor to Niagara Falls offering dining, drinking, dancing, gambling, and adult entertainment. Americans flocked to Ontario to patronize the Border Cities thriving vice economies.

For its part, the Canadian Government levied a nine dollar tax per gallon on all liquor sales. This export tax was returned when the customs department received a certificated receipt from the country where the shipment was imported. Since most of the liquor landed in America, those receipts were never redeemed. By 1928, Canada earned up to thirty-million dollars per year this way. 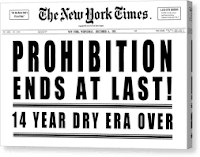 With the New York stock market crash on October 29, 1929 and the onset of the Great Depression, many people lost everything. Jobs were scarce and money was tight. The drunken revel was all but over. Then on December 5, 1933, the United States government passed the 21st Amendment repealing Prohibition. The bill landed on President Franklin Delano Roosevelt's desk and he signed it. The boom times of Prohibition ended on both sides of the international border. It would take another World War to turn the economies around for both countries.

The Rise and Fall of the Purple Gang:
https://fornology.blogspot.com/2018/03/the-rise-and-fall-of-detroits-purple.html
Posted by Gregory A. Fournier at 9:30 AM 0 comments