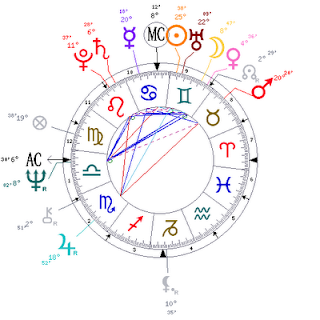 While doing a Google search on John Norman Collins, the so-called Coed Killer, I stumbled across his astrological natal chart and was struck by the intricacies of this graphic representation based on his birth information - June 17th, 1947 at 12:38 PM. Some other people born on this date are Newt Gingrich, MC Escher, Igor Stravinski, Barry Manilow, Greg Kinnear, Joe Piscopo, and Martin Bormann. 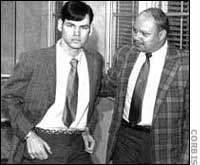 The website is www.astrotheme.com, and it touts itself as "A New Approach to Astrology." The printout is computer compiled and generated, and the site offers a crash course in some of the metaphysical arts - for instance, numerology and Chinese astrology. John's birth path is eight, and he was born under the Sign of the Pig.

After ten pages explaining the complexities of astrological interpretation, the final four pages do an analysis of Mr. Collins. The one ironic observation that struck me was, "You have so much charm and volubility that you easily manage to be what is known as a lady-killer." Really? The last page includes an interesting "Warning" disclaimer you may want to read first.

For my disclaimer, I would like to attach my voice to this quote from Nobel Laureate in Literature - Saul Bellow: "There is no limit to the amount of intelligence invested in ignorance - when the need for illusion runs deep."

http://www.astrotheme.com/carte.php?clef=2M7eNMpbDmMz&initialiser=1
Posted by Gregory A. Fournier at 9:02 AM 0 comments 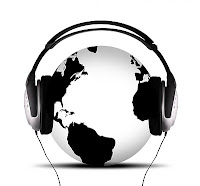 My publisher for Zug Island - Wheatmark.com - recommended a free internet radio booking service named radioguestlist.com which has worked quite well for me . Once registered with them, they send out daily listings of radio talk shows looking for interesting guests. A writer can simply look down the listings and choose a show that specializes in his/her area of expertise. I've contacted four stations, three with positive results and another I'm waiting to hear from.

On Monday night, I was interviewed on a Harlem radio show - Beefstewradio.com - which I have run as a link below. I also have bookings on "Sayinitplain.com" in February and on the "Hollis Chapman Show" in May. My website and blog helped me seal these deals, so I recommend that you have an engaging electronic platform. It is your 24/7 billboard and calling card.

Independent authors can use this service to get media exposure and advertise their books and future writing projects. Local advertising isn't cheap - this media service gives you national and international exposure for free! Give it a try.

http://www.blogtalkradio.com/beefstewradio/2012/01/24/interview-with-author-gregory-a-fournier
Posted by Gregory A. Fournier at 4:44 PM 0 comments

The Motor City has always be a boom or bust town. Ford, General Motors, and Chrysler are in their second year of profits and the future looks promising. When long time sales leader -Toyota - received bad press world-wide over a braking issue a few years ago, it damaged the company's reputation for reliability and customer loyalty as the world's best made car. 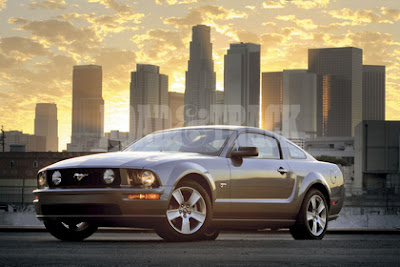 Along with Nissan, Kia, and Hyundai, The Big Three took advantage of Toyota's stumble and wrestled away a significant portion of their business. This wouldn't have been possible for GM or Chrysler without the government bailout which positioned them to reclaim some of the auto market from foreign competitors.

Ford was able to avoid a bailout because of an extensive European market which gave them a leg up over their rivals, and GM got on the ground floor in the Republic of China - with the Buick being the most popular car there. This helped GM repay their government loan.

The modern styling, fit and finish, and reliable state-of-the art technology of domestic cars have paved the way for this comeback - and not a second too soon for Detroit - as the domestic automakers continue to turn the corner in the consumer's mind. For more information, click on the following link.

Detroit in Ruins or a City on the Mend?

I just read a book review  in The New York Observer by Michael H. Miller of a photo study called Detroit: 138 Square Miles, a depiction of the ruins of Old Detroit, complied by Ms. Taubman - apparently she doesn't have a first name. 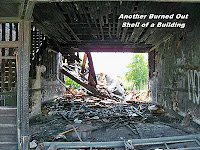 Anyone who has traveled to Detroit and driven outside the commercial enclave of business buildings, sport complexes, and gambling casinos downtown can see that the city and many of its people are hurting. Vast blocks of cleared land look like urban prairies, punctuated by burned out ruins too numerous and expensive to demolish.

Many of these neighborhoods have occasional signs of life in homes that have long since expired their reasonable lifespans - peopled by stubborn residents who anchor themselves in their old neighborhoods because they have no where else to go.

There is a brief glimmer of hope in the gentrification of the ruins of this city - some young, educated, and optimistic people seem willing to take a chance on Detroit - a city that almost everyone believes has seen its best days.

Detroit is ripe to reinvent itself. But first it must come to grips with its rough and tumble past and restore law, order, and opportunity to its inner city residents.
Posted by Gregory A. Fournier at 12:00 AM 0 comments

Finally, something about religion that makes sense to me. Double-click dark blue box. 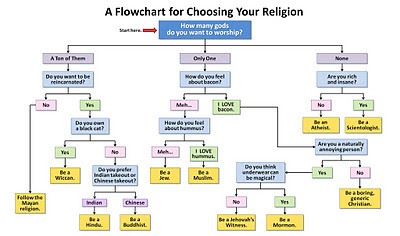 Posted by Gregory A. Fournier at 2:53 PM 0 comments

Confessions of a Yearling Writer

The first year of publishing and promoting my debut novel - Zug Island - has been an interesting learning experience. Lesson number one was that writing the book was only the beginning. 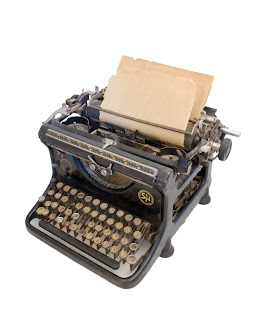 Preparing it for publication was the second layer of development. This involved an editor's trained eyes for deep editing, continuity, and format development. Decisions about the cut size of the pages, front and back cover designs, font style and size, and the price point needed to be made.

Once the copyright had been obtained and my novel was issued an International Standard Book Number (ISBN), my publisher, Wheatmark.com, had it listed in the Ingram trade catalog and on Amazon. I also had a Kindle format produced.

My publicist, Paula Margulies, informed me that now I needed to develop an electronic platform in support of the book. This involved creating and purchasing a domain name, building a website for the novel, choosing a web-host with webmaster services to update the site, setting up facebook and twitter accounts to begin social networking, and creating a blog to establish myself as a brand.

The part of all this that I was the most reluctant about was the blog. I feared the time involved in writing it wouldn't be worth the effort. I was right - it takes time; I was wrong - it is worth the effort! In addition, it helps me establish a writing habit.

In the seven months Fornology has been running, I've written 59 posts that have received over 3,000 hits - many of them global. From a commercial publishing standpoint, that may be modest, but as an independent author starting from ground zero, I'm very pleased.

Maybe the best thing I've discovered about blogging is that it is helping establish me as a credible writer by providing a showcase for my writing that is easily accessible to the public, the media, and booking agents. Blogging is opening doors for me that I didn't know existed.
Posted by Gregory A. Fournier at 6:36 PM 0 comments

Talk Radio - Why Not? 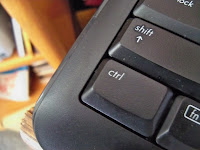 Looking through a newsletter from my publisher, Wheatmark.com, I discovered a free radio booking resource called Radio Guest List. Once you sign-in with them, they send out a daily listing of radio outlets requesting guests to interview for a wide range of topics.

Depending on the program's target audience, they are looking for authors, musicians, lifestyle commentators, financial planners, and "experts" in many areas. This website simply lists stations that need on-air talent. Once you find a request for a quest spot that is in your area of expertise, you contact their booking agent. That's it!

If they are interested, they will email you back to make arrangements. Within a week, I have been booked for two interviews to discuss my novel - Zug Island - one is for a show called Beef Stew, and the other is for a program named Sayin It Plain.

Other than readers, what new authors desperately need are publicity and exposure. This website provides both for free. Take advantage of it. Good luck!

Posted by Gregory A. Fournier at 9:18 AM 0 comments