August "Gus" Nykiel (pronounced Nickel) was a popular local Detriot athlete who played semi-professional football for a team called The Delray Merchants almost one hundred years ago. The team's name was changed to the Detroit Tigers football franchise, but it failed after its first season with the National Professional League in 1921. Nykiel decided to sponsor the team which became a semi-professional powerhouse keeping the name. They played semi-pro clubs from around Michigan and the Midwest. The Tigers became regional champions and were the team to beat for several years. Nykiel became a popular, sporting world figure who had a sport's field named after him.

Gus Nykiel began his rum-running career shortly after Prohibition began. First, Gus and his three brothers--William, Frank, and Joseph--used a rowboat and made several trips a day hauling liquor and beer to the downriver area. The Nykiel brothers eventually built a fleet of speed boats and became some of the wealthiest bootleggers on the river. Gus and his brothers had ties to the Purple Gang's downriver distribution network.

Delray lies across the Zug Island channel and the Rouge River where boats could be unloaded and powerboats could evade Coast Guard patrol boats on the Detroit River. It was an ideal place to smuggle liquor. If a boat had to toss its load, burlap bags full with liquor bottles were tied with loops called rabbit ears. When the coast was clear, smugglers would come back with a grappling hook and retrieve their goods. Sometimes, local Delray and River Rouge boys would watch the evening gun battles between customs agents and smugglers from the shoreline. They would remember where the loads were ditched--usually near or on shallow sandbars. When the danger passed, the boys would dive in and retrieve what they could often selling the Canadian whiskey back to bootleggers.

On March 17, 1927, saloon owner Gus Nykiel was arraigned in federal court for reopening his saloon at 8631 West Jefferson Avenue which had been closed and padlocked on federal court order. Several undercover Prohibition officers made buys which resulted in the raid. Large quantities of beer, whiskey, and wine were seized. Nykiel was said to be the owner of four other places where liquor was stored and distributed: 8866 West Jefferson, 465 Clairpoint, 110 Henry Street, and 3021 Fourteenth Street. 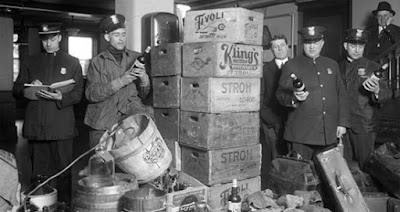 Nykiel was released on $5,000 bail. When his case came to trial, he plead guilty to violating the padlock injunction and owning the property but denied ownership of the liquor. He admitted he knew it was stored in his business. Federal Judge Charles E. Simons fined him $1,000. The owners of the liquor were identified as Sam Kert and Sam "Sammy Purple" Cohen. They were under federal indictment for conspiracy to violate the Prohibition laws. The two Sammies were known mentors and associates of the Purple Gang.

Nykiel's saloon was shut down permanently, but within a month, he opened a new location up the street at 8824 West Jefferson. At about 10:00 p.m. on June 27, 1928, Nykiel was parking his car in front of his saloon and scratched the paint of James Zanetti's car. Zanetti was a gunman from Chicago hired to extort money from bootleggers and speakeasy owners in the Downriver area for Pete Licovoli's East Side River Gang.

According to Gus's brother William, Zanetti began verbally abusing Gus, so Gus walked up and punched the out-of-town hood twice in the face. "I'll smack you again if you come around here looking for trouble. Tell your friends that Gus Nykiel hit you." Zanetti and Mike Dipisa--said to be gambler "Jimmy the Greek's" bodyguard--returned fifteen minutes later looking for Gus. The two men went into the saloon and spotted him behind the bar. Dipisa said he wanted to talk to Gus outside.

As soon as Nykiel stepped out the door, he was shot five times at close range and fell to the sidewalk. The shooters ran toward their getaway car. River Rouge Constable Edward A. McPherson happened to be in the saloon serving a summons when he heard the shots. With gun drawn, he stepped outside and exchanged gunfire hitting Dipisa. McPherson--for his pains--was shot in the upper jaw. Passerby, Mrs. Catherine Krozyck, was hit in the hand by a stray bullet.

Nykiel was taken to Delray Receiving Hospital where he died from his wounds. Dipisa was taken to Detroit Receiving Hospital where he died from a shot to the head, the back, and his right eye. When police notified Mrs. Nykiel of her husband's murder, she wept at news. "Gus may have been a bootlegger," she said, "but he was a faithful husband and a good father." 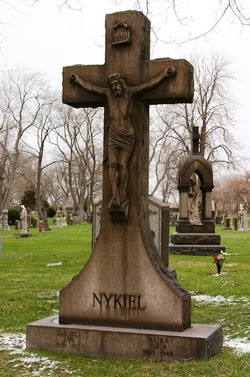 Gus Nykiel's funeral service was July 2, 1928 at St. John Cantius Roman Catholic Church in Delray. He was buried at Holy Cross Cemetery. Thousands of people paid their respects along the procession route to the cemetery. The majority of mourners were women, but underworld figures and police detectives were sprinkled among the crowd.

Gus's younger brother William told Inspector Henry J. Garvin of the crime and bomb squad that he witnessed the shooting. At the inquest, William repeated what he saw. But Garvin thought that the murder was more than a road rage incident. The inspector told reporters he believed the East Side River Gang was trying to seize control of Nykiel's business interests and control smuggling on the Detroit River from Lake St. Clair to Monroe.

James Zanetti was arrested by two police officers after a short car chase and taken to Wayne County Jail. Because he attempted suicide in his cell, Zanetti was admitted to the psychopathic ward of Receiving Hospital, where he was heavily guarded and chained hand and foot to a hospital bed. Nurses reported that at intervals, he would shudder, roll his eyes back in his head, and quiver issuing long, drawn out moans. Psychiatrists believed Zanetti was mentally sick from "crime hysteria" or what was better known on the street as being "yellow." Dr. Polzker believed Zanetti's suicide attempt failed because he didn't have the courage to follow through with it.

The Zanetti trial was slated to begin on August 30th, but the prosecution's primary eyewitness--William Nykiel--could not be found. The case was postponed twice before Detroit police announced on September 8th that their key witness was hiding out for fear of his life in LaSalle, Ontario where they had no jurisdiction to extradite him. The prosecution proceeded without him. On September 13th, James Zanetti was acquitted of Gus Nykiel's murder. After the not guilty verdict was delivered, Zanetti and his lawyers were surrounded by back-slapping and handshaking from their underworld supporters.