My main motivation for flying into Michigan last week was to interview half a dozen people who had first hand knowledge of and experience with John Norman Collins, the alleged Michigan Murders serial killer. It should be remembered that Collins was only convicted of one count of murder; that is what makes this case so enduring in the minds of people familiar with the facts. Once authorities had convicted their man in the Karen Sue Beineman murder, the murders of the other young women went into the cold case files.

My time in Ypsilanti was well-spent. I spoke with a woman who often rode on the back of her boyfriend's motorcycle, while he and Collins toured the back country on lazy summer weekends, in an area where all of the young women's bodies were dumped. She left me with several important insights that I've not read or heard before. 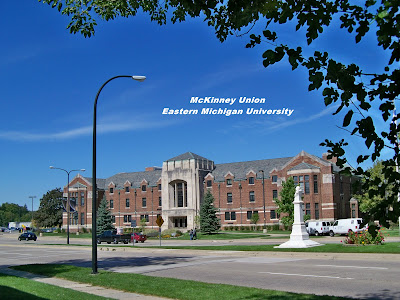 Then there is the bike riding buddy, who went with John to "check out" Peter Hurkos, the Danish psychic called in on the case, at his hotel in Ann Arbor. I heard a great story from him, which I'm saving for my book, that I'm certain has never been told before.

I also heard a chilling tale of a young Eastern Michigan University woman who was fixed up on a double date with John Collins. Apparently, they were going to a campus frat party and Collins was withdrawn and sullen. I asked my source to describe her sorority sister: quiet and cute, short brunette hair, slight build, and recently pierced ears. She fit the profile of the murdered women to a tee. This may have been the woman John confessed to, that he didn't believe in the fifth commandment - Thou shall not kill. I am getting her contact information, so I can confirm that when I speak with her.

The next day, I was interviewing someone else over lunch, and I noticed two older ladies sitting adjacent to us in a booth at Haab's, Ypsilanti's oldest and finest restaurant. I overheard them talking about the John Collins case in hushed tones. What a coincidence! I couldn't believe my good fortune, but that will be the subject of another post.
Posted by Gregory A. Fournier at 12:00 AM