Last evening, my wife and I spent a wonderful night in West Hollywood at the Los Angeles Book Festival and DIY Independent Film Awards held at the historic Roosevelt Hotel, site of the first Academy Awards in 1928. Located on Hollywood Boulevard - across and down the street from the Kodak Center - we were there on a Saturday night, and I couldn't help but feel like a tourist.

My novel, Zug Island, won an Honorable Mention in General Fiction. After a very nice awards presentation and the acceptance speeches, we viewed a dozen clips from independent films which had won awards. See the films yourself at the link below. 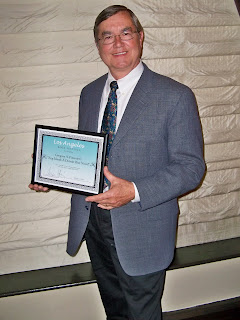 It was a fun night, and I got to meet some interesting and ambitious people. Hal Holbrook won an award for a children's book he had written, but he couldn't be there to accept it because he was on tour.

Some of the authors had remarkable stories to tell. I particularly liked the story about blind people using power tools to build toys and their self-confidence. Seriously!

Afterwards, I took my sweetheart to Mel's Drive-In and made a night of it. I couldn't help but think of Marion Ross and the Fonz - their pictures were all over the place.

DIYFILMFEST.COM
Posted by Gregory A. Fournier at 6:09 PM