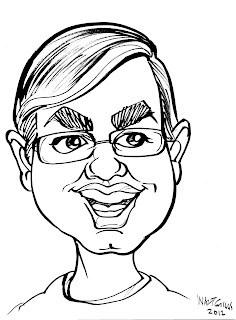 While doing research for my next book, In the Shadow of the Water Tower, in Ypsilanti, Michigan, I ran into Walt Griggs, a caricature artist preparing to set up for a party he was working at The Corner Brewery.

I struck up a conversation with him about my reason for being in town and he was quite intrigued. He had never heard of John Norman Collins or the co-ed killings.

"Would you like me to draw you? I need to warm up." The party hadn't started quite yet.

"No. Just sit there and tell me more about your book."

Five minutes later, he handed me the drawing you see above. I was really pleased with it, though I don't think I'm that gleeful in real life. Of course, that's why it's called a caricature.

What a great idea! Hiring someone to caricature quests at a party. The artist gets a commission for being there, and he earns tips and future referrals for other jobs at the same time.

As people began to arrive at the private party, I traded him a copy of Zug Island and thanked him. We both made a good deal I think.

Check out Walt's website at: www.artistrising.com/galleries/waltgriggs
Posted by Gregory A. Fournier at 8:53 AM