Arguably the most recognized icon in Allen Park next to the Big Wheel off I-94 are the concrete arches which straddle the tracks of the Detroit, Toledo, and Ironton (DT&I) railroad that cuts through town west of Allen Road and east of Pelham Road. Everyone in town has walked or driven across the tracks at Champaign Road on their way to Allen Park High School and wondered about these silent sentinels.

I remember gazing out the second floor windows of my geometry class and daydreaming where those tracks could transport me away from the drone of Mr. K. and the tapping of chalk on his blackboard, charting out axioms and postulates. Phewy!

Students who lived southeast of the school took the shortcut home through the hole in the fence and walked down the tracks and crossing over wherever they needed to. I remember the diminishing perspective of the arches as they stretched into the distance. The DT&I went about five miles north of Allen Park to the Rouge Plant, and it stretched south through most of Ohio, connecting with major east/west lines along the way.

The Ford Motor Company (FMC) at Henry Ford's behest purchased the bankrupt and poorly run DT&I in 1920 for a mere five million dollars. Frustrated with shoddy rail service, assembly line production delays, and exorbitant shipping charges, Henry Ford recognized the strategic importance of affordable and reliable supply lines for the uninterrupted mass production of his Model T. Henry Ford was determined to control every aspect of production at the Rouge Plant, from the shipment of raw materials into the plant to the shipment of the finished product from the plant.

Henry Ford announced on July 1, 1923 that he would convert the DT&I from steam locomotion to electrical power. The steam locomotives FMC bought in the acquisition were slow, dirty, loud, and required continual maintenance. The rolling stock acquired was in disrepair after two and a half years of neglect at the end of World War I, so Ford engineers were set to the task of improving the rail line from stem to stern.

On June 1, 1925, trial runs were made with two electrified locomotives made from components designed and built by Westinghouse Electric Company. The power was supplied to the new locomotives by an overhead electrical cable strung from one concrete arch 300 feet to the next one. The power line ran for the original seventeen miles of electrification. At first, power was generated at Ford's Highland Park plant, but later the Rouge Plant generators came online when more power was needed. The top speed of the dark green and red locomotives was 43 mph. Both locomotives entered limited service in 1926.

The concrete arches carrying the power line were designed at the Fordson concrete plant within the Rouge Plant complex. They were in active use until March 1, 1930. Each arch, called a catenary, was built with 95 cubic feet of Ford concrete and 257 feet of rebar made at the Rouge Plant steelworks.

The DT&I was now showing a profit, but Henry Ford was frustrated with interference and regulation from the Interstate Commerce Commission. FMC decided to sell DT&I on June 27, 1929 to Pennroad Corporation for approximately thirty-six million dollars making FMC a thirty-one million dollar profit over their initial five million dollar investment. But more money than that went into the research, development, and maintenance of the line to transform it from a "streak of rust" into a profitable operation.

FMC sold the DT&I line four months before the stock market crash on "Black Tuesday" October 29th, 1929. In March of 1930, the two electric locomotives were scrapped and the overhead power line was taken down. In 1947, some of the concrete arch supports were removed and re-purposed to form an embankment at Mosquito Lake in southern Ohio. These arches were made to last. It took a large crew two days to remove just one of them. Most of the arches are still in place between the Rouge Plant in Dearborn and just beyond Flat Rock, Michigan. 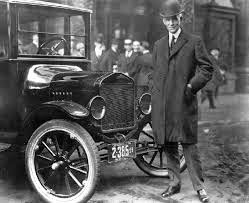 These arches stand as a silent monument to the vision and determination of Henry Ford and his forward looking genius. It wouldn't be long before trolley cars and subway cars would be running on generated electrical energy in cities across the globe. Eighty years later, battery powered and solar powered electric automobiles have become a reality in our twenty-first century world. It seems like an oversight that Ford's concrete arches are not listed in the National Registry of Historic Places.

For a more detailed history of Henry Ford's involvement with the Detroit, Toledo, and Ironton (DT&I) railroad line and the development of the electric freight train, view the following link:
http://www.macsmotorcitygarage.com/2013/10/26/henry-fords-railroad/
Posted by Gregory A. Fournier at 1:20 PM