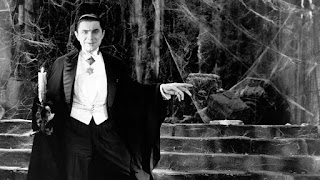 Each syndicated television market had their own host. Detroit had one of the first horror movie personalities in the country. The show was hosted by Mr. X--Tom "Doc" Dougall--a classically trained actor who taught English at the Detroit Institute of Technology and moonlighted as a vampire on Friday nights. Unlike later horror movie hosts who would spoof their roles or riff on the movies they showed, Dougall was grimly serious and set a solemn tone for what was to follow. What most people don't know about Professor Dougall is that he co-wrote several Lone Ranger and Green Hornet scripts for WXYZ radio.

The opening of the show was memorable, but I was only nine years old when I started staying up every Friday night to see the classic monsters and mad-scientists--The Invisible Man comes to mind. This is how I remember the opening: 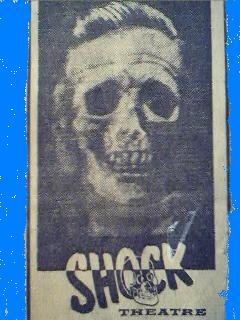 The show's marquee card came up with ominous organ music and a crack of thunder in the background. Replete in vampire grab with cape, Mr. X walked slowly on screen holding a huge open book announcing the night's feature in a scary voice. Next, he would say, "Before we release the forces of evil, insulate yourself against them." With a sense of impending doom, Dr. X continued, "Lock your doors, close your windows, and dim your lights. Prepare for Shock." The camera came in for an extreme close-up of Dr. X's face, more lightening and thunder effects, and finally his gaunt face morphed into a skull. Then the film credits would roll.

There was something positively unholy about the show which made it an instant success with my generation of ghoulish Detroit Baby Boomers. The show's ominous organ music set the mood for the audience. The piece was listed only as #7 on a recording of Video Moods licensed for commercial television and not available to the public.

No video link to Detroit's Shock Theatre's opening has surfaced, but the above newspaper ad for the show gives an idea of the facial dissolve special effect. If anyone knows where I can find a link, Gmail me so I can add it to this post. Thanks.