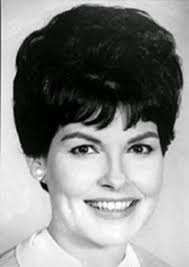 One ot the most beloved ladies in Detroit television history was Rita Bell Connolly, a graduate of Marygrove College with a business degree in public relations. Rita landed a job with the Detroit chapter of the United Way in the mid-1950s and sat on the boards of many non-profit service organizations around town. She was a member of the Women's Advertising Club and a much sought-after speaker.

While singing at a Wrigley's corporate event, a WXYZ-TV executive was struck by Rita's presence and personality--not to mention her wholesome beauty. He asked Rita if she might be interested in working on local television. Once she determined that the offer was legitimate and not a come-on from a corporate Lothario, she recognized what an opportunity it was and agreed to give it a try.

On Monday, April 29, 1957, Rita made her television debut on Lou Gordon's Midnight News Hour with a short segment at 12:15 am called Forecasts and Fashions where she gave the next day's weather report and some fashion news. Rita made history by becoming Detroit's first woman weather forecaster. It wasn't prime time, but Rita proved she had screen presence and was confident appearing on camera.

On the advice of the station manager, Rita dropped her maiden name and became known as Rita Bell, which had a distinct ring to it. The following year, Rita landed a better time slot and did local, state, and national weather at 7:10 pm.

WXYZ programmers noted from their market research and Rita's fan mail that she drew in viewers. Then on December 12, 1960, Rita landed a program that would become her life's work called Prize Playhouse from 8:30 am to 10:00 am. As her morning audience grew, the program was rebranded Rita Bell's Prize Movie.

Rita showed classic movies and during commercial breaks, she took calls from viewers. Everyday she would play a mystery tune, and if callers correctly guessed its name, they would get a cash prize of seven dollars. If the tune wasn't guessed, seven dollars was added to the prize total. WXYZ broadcast over Channel 7--hence seven dollars. 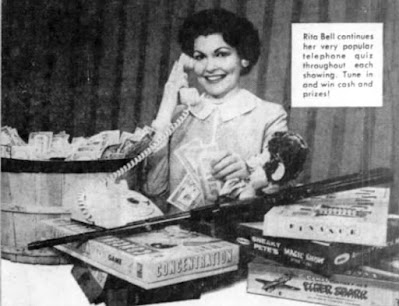 Rita Bell became the darling of Detroit daytime television, known for her sunny disposition, bright-eyed smile, and pleasant voice. She was genuine and charming. Her studio set was simply a huge, telephone dial prop hanging on the wall behind her and a table with a working telephone on it. Rita's hairstyle changed with the season as often as the telephones she used. The Prize Movie theme song was Al Hirt's catchy Cotton Candy.

In the spring of 1971, Rita and her husband Jerome F. Hansen took a well-earned, three-day vacation. Detroit Free Press feature columnist Shirley Eder filled in for her. The mystery tune had run for four months, but nobody knew the tune's name and viewers were grumbling. The cash prize reached $4,529. On April 23, 1971, Eder's first caller, Mrs. Shirley Gurich answered, "Pioneer of the Stars." After that, the show's producers started giving away products donated by local sponsors for on-air plugs.

In 1977, Rita lost her Prize Movie program with scheduling pressure from above and below. The ABC network began producing Good Morning America to compete with NBC's Today Show from 7:00 am to 10:00 am, and when WXYZ introduced Kelly & Company with popular newscaster John Kelly and his wife Marilyn Turner at 10:00 am, their show became the talk of the town and the most popular daytime talk show in Detroit television history. Rita was relegated to doing movie reviews and interviewing celebrities when they came to town to perform at the Fisher Theater or some other Detroit venue. Her career was clearly going backwards. 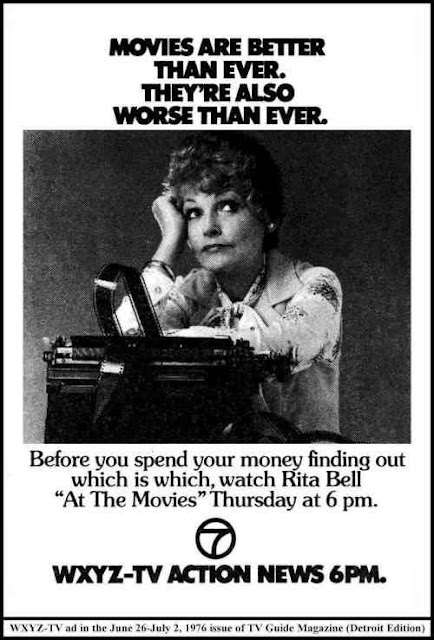 On June 1, 1978, WXYZ declined to renew Rita Bell 's contract after twenty-one years of dedicated service. A spokesperson for the station said, "Letting Rita go was a hard decision. There simply wasn't enough for her to do." Rita told a colleague that she expected to be released, "But it was still a gut-wrenching feeling."

Many a Detroit area kid has fond memories of staying home from school on snow days, sick days, and vacation days snuggling on the couch watching Rita Bell's Prize Movie in the sixties and seventies, but America's entertainment and viewing habits had changed and much of Rita's core audience outgrew her program. If you can measure a person's value by the esteem others hold for them, Rita remains one of the most admired women in Detroit television history.

After the morning talk show craze hit, Rita retired to Poway, California with her husband, a Detroit Free Press reporter. She succumbed to colon cancer on December 9, 2003 at the age of seventy-eight. Rita's ashes are inurned at Fort Rosecrans National Cemetery in Point Loma, California next to her husband, overlooking San Diego Bay and the mountains beyond.

Bill Kennedy at the Movies