In the early years of Prohibition in America, the weapons of choice for the underworld were fists, black jacks, brass knuckles, tire thumpers, stilettos, hand guns, sawed-off shotguns, and rifles. With the first attempt on Al Capone's life on January 12, 1925, members of the late Dion O'Banion's North Side Gang--Bugs Moran, "Schemer" Drucci, and Hymie Weiss--had sworn a blood vendetta against Capone and his organization for assassinating their boss.

The trio raked .45-caliber bullets along the side of Capone's car with a weapon new to the streets--the Thompson submachine gun. Capone survived the attack. When he looked at the perforated driver's side of his Cadillac touring car and the damage done to the buildings in the line of fire, Capone remarked, "I need to get some of those." Big Al hastened to equip his arsenal with machine guns. 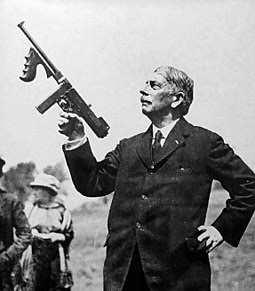 The press dubbed the weapon the "tommy gun," and it changed the rules of gangster warfare. The automatic weapon was co-invented by Brigadier General John T. Thompson in 1918. The first commercial models were made by the Colt Manufacturing Company in 1921, too late for World War I. The United States Army declined to adopt the weapon and law enforcement showed little interest in the weapon because the police were afraid of innocent civilian casualties.

With the military and law enforcement markets closed to Thompson, he and several investors started the Auto-Ordinance Corporation in New York. They manufactured 15,000 of the guns in 1923 selling each for $175 with a 20-round clip or a canister drum that could hold up to 50 .45 cal rounds for an extra $50. Later on, 100-round drums became available.

Auto-Ordinance wholesaled the submachine guns to firearm retailers across the country and directly to the public through mail order. All the seller required was a purchaser's name and address. Because this hybrid weapon was entirely new and in a class of its own, it didn't fall under existing gun laws. Anyone could legally purchase as many submachine guns as he could afford.

Nobody planned for this military weapon to be available to civilians--much less fall into the hands of outlaws--but business is business and a sale is a sale. The weapon soon became a status symbol for gangsters. Once the government instituted strict controls in the late 1920s, black market guns sold for as much as $2,000 each. The only people who could afford them were gangsters. Attempts were made to etch out serial numbers or stamp small Xs over the serial numbers, but crime science developed an acid wash that could bring out the obscured numbers.

The Thompson machine gun--also known as the chopper, the Chicago Typewriter, the Trench Broom, and the Street Sweeper--changed the rules of gang warfare. The original assault weapon was light weight (under ten pounds) and portable; it came with a 20-round stock box clip or with an available canister drum holding 50 .45-cal cartridges; the gun had a 500 yard range with a rate of fire between 600 to 750 rounds per minute; and the muzzle velocity was 935 feet per second. 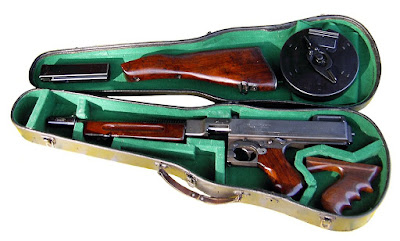 The original models were hard to control and next to impossible to aim accurately, but as weapons of mass murder and mayhem, the tommy gun had no rivals. The underworld was fascinated with its new plaything. The weapon's compact size allowed it to break down small enough to be carried in a violin case. The chopper became the signature weapon of several major crime syndicates and was involved in some of the most infamous murders of the Prohibition era.

Link to Detroit's Purple Gang post: https://fornology.blogspot.com/2018/02/kosher-nostra-detroits-purple-gang.html
Posted by Gregory A. Fournier at 8:08 AM